Researchers used the powerful microscope to uncover and image never-before-seen details of the insect's nervous system.

Researchers at Columbia University have created beautiful 3D videos of a fruit fly's nerve cells in action. To achieve this, they used Columbia's SCAPE microscope that is capable of imaging neurons at lightning-fast speeds.

The task was not done just for aesthetics. The 3D images allowed the researchers to examine how the insect's body cells report movements back to the brain.

"We know that the brain receives sensory signals through electrical pulses passed along neurons, but we didn't understand why some kinds of neurons are located in specific positions, or how particular signaling patterns represented different movements," said Wesley Grueber, PhD, a principal investigator at Columbia's Mortimer B. Zuckerman Mind Brain Behavior Institute and the paper's co-senior author.

"To understand this process, we needed to know what signals the neurons are sending while the larva crawled around unconstrained."

"Although we could make larvae whose neurons were labeled with fluorescence flash as they fired, we had great difficulty imaging them," said Rebecca Vaadia, a doctoral candidate in the Grueber lab and the paper's co-first author.

"Even our fastest microscopes required the specimen to be constrained to move unnaturally slowly, so we could never truly capture neural activity that reflected the animal's natural, unencumbered movements until we began using SCAPE."

SCAPE has been particularly created to image things in 3D extremely fast, explained the researchers. In doing so, the microscope allowed for the nerve cells flashing inside the fruit fly larvae to be recorded in real time.

The experiment generated a massive amount of data. In order to understand it, the researchers developed algorithms that tracked each proprioceptive cell. 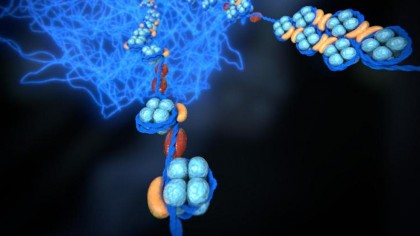 These cells are sensory receptors that use internal stimuli to detect changes in the position or movement of the body. As such, they are responsible for the insect's ability to know its location.

"Our experiments consistently showed that each of the proprioceptor neurons reacted differently as the larvae crawled along, an observation that could not have been made if the larvae had been constrained," said Dr. Grueber, who is also an associate professor of physiology and cellular biophysics and of neuroscience at Columbia's Vagelos College of Physicians and Surgeons.

"We saw, in real time, how some neurons fired when the animal's body stretched, while others fired when it compressed."

Scientists had long speculated that proprioceptive cells were redundant in their roles. This is because turning one off would result in slower movements in the insect.

The new study, however, discovered that each neuron has its own unique role. The findings showed that each cell is positioned to sense specific aspects of the animals' movement. As such, each neuron is essential to the insect.

The study is published in the journal Current Biology.