In just nine years, Kepler discovered over 2,600 planets outside our solar system and became one of the most successful telescopes ever.

By  Shelby Rogers
Oct 31, 2018
Illustration celebrating the legacy of the Kepler Space Telescope and its discoveries. Wendy Stenzel/Daniel Rutter for NASA

After nine years of service exploring deep space, the famous Kepler Space Telescope ran out of gas. NASA announced it would 'retire' Kepler as a result.

The NASA space telescopes have had a rough go of it within the last month. Just a few days ago, the Hubble Space Telescope got back online despite a potentially devastating gyroscope failure. After NASA officials reconfigured the system, they were lucky to restore the older telescope back to its functionality.

Kepler, unfortunately, will have a bleaker fate.

A history of space discovery and hope

Kepler far exceeded NASA’s expectations for its first “planet-hunting” space telescope. During its time, it discovered 2,600 planets. Many of those planets gave astronomers hope there could be life outside of Earth.

"As NASA's first planet-hunting mission, Kepler has wildly exceeded all our expectations and paved the way for our exploration and search for life in the solar system and beyond," said Thomas Zurbuchen, associate administrator of NASA's Science Mission Directorate in Washington. 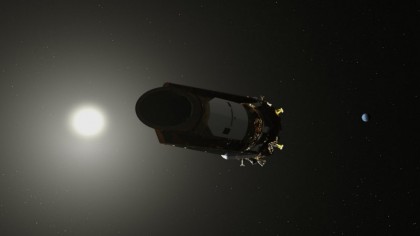 "Not only did it show us how many planets could be out there, it sparked an entirely new and robust field of research that has taken the science community by storm,”  Zurbuchen continued. “Its discoveries have shed a new light on our place in the universe, and illuminated the tantalizing mysteries and possibilities among the stars.”

Kepler helped astronomers estimate between 20 to 50 percent of the stars we see in the night sky have planets the size of Earth around them. Better still, Kepler discovered a possibility those planets could be in the habitable zones of the parent stars.

"When we started conceiving this mission 35 years ago we didn't know of a single planet outside our solar system," said the Kepler mission's founding principal investigator, William Borucki, now retired from NASA’s Ames Research Center in California’s Silicon Valley. "Now that we know planets are everywhere, Kepler has set us on a new course that's full of promise for future generations to explore our galaxy."

Kepler launched in 2009 with the largest digital camera outfitter for outer space at the time of launch. It was originally created to stare at 150,000 stars at one time -- specifically in the Constellation Cygnus. Kepler made the first major survey of planets within the Milky Way.

"The Kepler mission was based on a very innovative design. It was an extremely clever approach to doing this kind of science," said Leslie Livesay, director for astronomy and physics at NASA’s Jet Propulsion Laboratory, who served as Kepler project manager during mission development. "There were definitely challenges, but Kepler had an extremely talented team of scientists and engineers who overcame them.”

Despite mechanical failures, the Kepler system still managed to make observations. Kepler met its primary objectives just four years into its mission, leading the NASA team to switch its views of the sky every three months. This extended mission became known as K2, and it helped Kepler’s observation count grow to over 500,000 stars.

Kepler laid the foundation for the next big “planet hunter” developed by NASA. The Transiting Exoplanet Survey Satellite (TESS) system was built on the template of Kepler’s success.

And even though TESS will collect fresh data, Kepler’s work still isn’t done.

Kepler’s Campaign 19 will work in conjunction with the first batch of TESS data. NASA researchers hope they can get as much data as they can out of Kepler before formally saying goodbye.

"We know the spacecraft's retirement isn't the end of Kepler's discoveries," said Jessie Dotson, Kepler's project scientist at NASA’s Ames Research Center in California’s Silicon Valley. "I'm excited about the diverse discoveries that are yet to come from our data and how future missions will build upon Kepler's results."