According to a recent report, Honda's popular teenage robot Asimo won't be getting anymore upgrades and robotics efforts will be redirected.

Even robots find retirement. A new international report indicates that Honda Motors could be putting its popular robotics system Asimo out to pasture.

The company completely halted all development of Asimo, according to outlet Nikkei. The automobile manufacturer will instead focus on the development of more practical robots.

"We will still continue research into humanoid robots, but our future robots may not be named ASIMO," Honda spokesman Hajime Kaneko told AFP.

Asimo stands for Advanced Step in Innovative Mobility, and it made its debut in 2000. Asimo was the result of over 10 years worth of robotic R&D from Honda. The robot took its very first steps in 2005, and it came to the United States a couple of years later.

The robot was originally known as one of the first to successfully walk like a human. The seventh version of Asimo measured 130 cm (roughly 4.2 feet) tall and weighed 48 kg (approximately 105.8 lbs). He could even walk at a rather brisk pace, clocking in at 9 kph (5.5 mph).

However, Asimo hasn't exactly aged well when compared to robotics systems put out by companies like Boston Dynamics. The most recent Asimo update was in 2011.

The Asimo project also proved one of the hardest for Honda to both continually improve and also commercialize. The Honda Saitama Prefecture research facility had also started working on the HondaJet small business aircraft and also making fuel cell batteries. While bi-pedal robots are certainly entertaining, Honda could quickly commercialize its other projects. 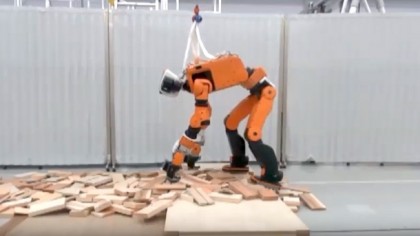 This Humanoid Disaster Response Robot Is Designed to Save Lives

Does this mean a harsh end for an awkward albeit slightly lovable robotics system? According to Honda and Nikkei's report, no. Honda wants to apply Asimo's technology into other robotics systems which could be used in physical therapy or autonomous vehicles.

While Asimo might not be the public (robotic) face of Honda anymore, the robot still managed to do some impressive things, including meeting with Former US President Barack Obama during his time in office.

Honda will still continue to invest in its robotics as well. Currently, the company offers a lawn-mowing robot that is sold around the world. The lawn mowing system is autonomous and can navigate even the most hectic lawns on its own. In response to the Fukushima reactor meltdown of 2011, Honda created a robot with the ability to inspect damaged facilities like the Fukushima remnants.