Honda announces it will showcase a family of robots at this year's CES in Las Vegas, Nevada.

Each year, the Consumer Electronics Show is filled with the latest in automation and robotics, and it looks like this year won't be any different. However, one company is catching attention for its family of autonomous robots. Honda announced that, rather than debut autonomous cars, they're unveiling a whole family of true robots.

And they're really, really cute.

The four robots come under the same "family" -- the 3E Robotics Concept. Together, Honda wants to use them to show the potential of everyday robots in the household.

"Expressing a variety of functions and designs, the advanced robotic concepts demonstrate Honda's vision of a society where robotics and AI can assist people in many situations, such as disaster recovery, recreation and learning from human interaction to become more helpful and empathetic," the company noted in a press release.

Each robot has its own functions, and all of them have names reminiscent of Star Wars droids.

First, there's the 3E-A18 which is a companion robotics concept meant to express itself to humans and show compassion. They look a bit like a robotic version of an unassuming Ewok mixed with those Emojibots from Doctor Who.

The 3E-B18 unit is a tricked out mobility robot designed for indoor and outdoor usage. It's like a tricked out wheelchair/scooter combination that would make even Charles Xavier jealous.

Next, the 3E-C18 is a smaller electric mobility concept that comes equipped with extensive cargo space (surprising given its relatively small build). It looks a bit like a tricked out drink cooler, but we'll see what it does at this year's CES. Honda offered relatively few details regarding that robot.

Lastly, the 3E-D18 is an autonomous all-terrain vehicle concept. It's equipped with AI to help users throughout their day. It's sleek yet hearty, and it's the most "traditionally Honda" of the four within the announcement. 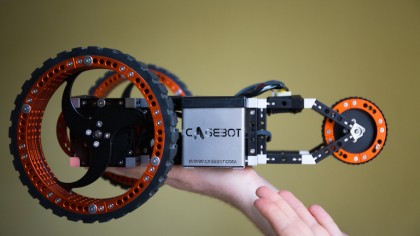 The robots won't be Honda's only submission to the CES floor. They'll also be showing off their Mobile Power Pack World, "which includes a portable, swappable battery pack for electric vehicles, and a re-charging system for use at home, recreation or during a natural disaster," the company noted.

This isn't Honda' first foray into robotics. In 2014, the automaker debuted ASIMO the Humanoid Robot. ASIMO, which stands for Advanced Step (in) Innovative MObility, had been around for nearly 14 years before his big debut at CES. Honda engineers dedicated nearly a decade to working on bipedal walking robots.

While Honda might be a little nontraditional with this year's CES, other companies have already announced what they're bringing to the table. FEV's smart vehicle will be making its debut in the U.S. on the streets of Las Vegas. The car is programmed to have SAE Level 5 automated driving in accordance with the U.S. Department of Transportation guidelines. The company says it's been developing the automation independently of the vehicle, and now they're ready to showcase the two of them together.

According to CES President Gary Shapiro, there will be over 4,000 vendors showcasing their gadgets at this year's convention. Startups alone will feature 800 companies, 200 more than last year.