New research published in Science has revealed that honey bees have an elaborated understanding of numbers despite their small brains.

A new study published in Science has revealed that honey bees can grasp the concept of zero, an ability previously believed to be reserved for more evolved species. The paper, entitled "Numerical ordering of zero in honey bees", is a collaboration of RMIT University in Melbourne, Australia, the University of Toulouse in France and Monash University in Clayton, Australia.

Insects get it too

“We’ve long believed only humans had the intelligence to get the concept (of zero), but recent research has shown monkeys and birds have the brains for it as well. What we haven’t known – until now – is whether insects can also understand zero," said RMIT University's Associate Professor Adrian Dyer.

Dyer and his colleagues designed a series of targeted experiments to test honey bees' potential to grasp the concept of the number zero. In the first experiment, the bees were evaluated on their ability to understand the concepts of less than and greater than.

In the second test, the researchers assessed the extent to which the insects understood the concept of zero in comparison with other animals. Finally, in a third round, the bees' grasp on the less-than concept using the numbers zero to six was appraised.

The findings were nothing short of impressive. The researchers determined that the honey bees not only comprehended the concepts of greater than and less in reference to a blank stimulus representing the number zero, but they were also able to place zero in relational order to other numbers. 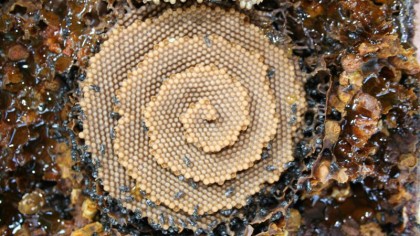 Zero is lower than one

"Bees thus perform at a level consistent with that of nonhuman primates by understanding that zero is lower than one," concluded the study. The researchers are now pondering whether this numerical understanding may be common in many animals or if it is the result of some evolution particular to honey bees.

Previous research on honey bees has revealed that the pollinators can learn complex skills from their peers and even grasp abstract concepts such as same/different and above/below that rely on relationships between objects. This is particularly impressive considering bee brains have approximately 1 million neurons, significantly less than the 86,000 million neurons found in a human brain.

“The discovery that bees can show such elaborated understanding of numbers was really surprising given their tiny brain. Large brains are thus not necessary to play with numbers. This capacity is therefore probably shared by many other animals," speculated study co-author, Dr. Aurore Avarguès-Weber from the University of Toulouse in France.

Last October, researchers from the University of Edinburgh found that neurons located in the central complex of bees' brains could detect and remember changes in direction, speed, and distance. This enables the roaming insects to return to their homes using the most direct route.

The region where the cells were stored in the bees' brains was also determined to be the same one that controls the navigation system used by other species including humans. It seems these little flying beings are not so different from us after all.