Scientists have just revealed a new vaccine for honeybees, one that will save thousands of bees.

For the first time, there is a vaccine made just for insects.

That's right, honeybees are staying safe thanks to a research team from Finland's University of Helsinki. In early December, the university revealed it created the first vaccine for bees.

Thanks to the vaccine, the pollinators will be safe from different diseases, including the deadly American foulbrood, which can kill colonies. 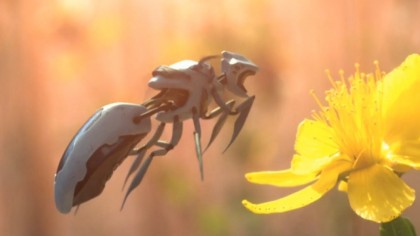 According to the New York Times, "experts hope it can provide one solution for the array of problems facing bees." It's a major factor in the human food pyramid, too, since bees help pollinate almost one-third of edible food.

"Now we've discovered the mechanism to show that you can actually vaccinate them," scientist Dalial Freitak said. "You can transfer a signal from one generation to another."

The vaccine, called PrimeBEE, will prevent thousands of bees from dying from different diseases.

Since the bees are small and won't actually sit still for a vaccine, the research team created something the bees would love. They made an edible solution, one that is sweet and sugary, attractive enough to make the bees want it.

The queen bee will then eat the sugar cube-like product, which takes about a week to finish. The pathogens from the vaccine will move into the queen's eggs, eventually causing immunity to diseases.

The beekeeper's role is to make sure the queen is doing everything she usually does. The PrimeBEE treatment will deliver the queen bee to the beekeeper "in a queen cage with 10 accompanying nurse bees to feed her."

“Vaccinations have always been more associated with vertebrates and being dependent on the presence of antibodies,” Freitak said. “That’s why vaccinations have never been considered.”

The product is not on the market yet, though.

The goal is to have the bee's offspring immune to diseases. The first one the scientists tested was the American foulbrood, which according to the New York Times, kills about 60,000 bees in a colony during the summer months.

"We need to help honey bees, absolutely," Freitak said. "Even improving their life a little would have a big effect on the global scale. Of course, the honeybees have many other problems as well: pesticides, habitat loss and so on, but diseases come hand in hand with these life-quality problems."

Now, instead of having to burn down colonies, beekeepers will be able to protect their little critters and make sure they won't succumb to such awful diseases.

Most Vaccine Hoaxes Were Carried Out by Just 12 People