UC Berkeley researchers developed a new system of gene editing to give yeast the factors and flavors normally associated with hops in beer.

Hoppy brews have quickly become crowd favorites among beer drinkers and craft brewers, but a team of engineers recently developed a way to keep its signature flavors without using the namesake ingredient.

UC Berkeley biologists created a new style of beer that maintains the two prominent flavor notes that hops give off but without using resource-draining hops themselves. According to lead author Charles Denby, hops use a lot of water, fertilizer and energy in order to produce the crop, harvest it, and then transport it for production. One pint of craft beer can require 50 pints of water to grow the hops -- and that doesn't include producing the beer itself.

"My hope is that if we can use the technology to make great beer that is produced with a more sustainable process, people will embrace that," Denby said. 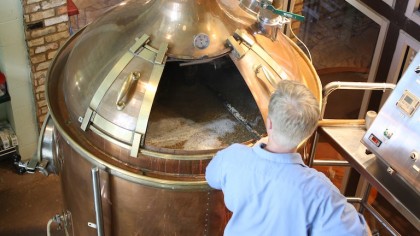 The team engineered yeast strains using CRISPR-Cas9 and inserted four new genes into the strand. They also added promoters that regulate the genes into industrial brewer's yeast. Those two genes code produce flavor components common to plants -- specifically for this project, the genes came from basil and mint.

They created specially designed software to perfectly mix the promoters with the linalool synthase and geraniol synthase in the proper proportions. The biologists took their inspiration from the proportions found in Sierra Nevada Brewing Company -- which was close to the team's startup.

Denby and the team had so much confidence in their creation that they taste-tested the beer with employees of the award-winning Lagunitas Brewing Company based in California. During the double-blind taste test, Lagunitas innovations manager said there were no off flavors but notes of "fruit loops" and "orange blossom."

"This was one of our very first sensory tests, so being rated as hoppier than the two beers that were actually dry-hopped at conventional hopping rates was very encouraging," said Rachel Li, second author of the study and co-owner of the Berkeley Brewing Science startup.

Initially, Denby started his time at UC Berkeley developing eco-friendly transportation fuels by inserting engineered molecules into commercial products. However, he noticed he could transfer his studies outside the lab and into something unexpected.

"I started home brewing out of curiosity with a group of friends while I was starting out in Jay's lab, in part because I enjoy beer and in part because I was interested in fermentation processes," he said. "I found out that the molecules that give hops their hoppy flavor are terpene molecules, and it wouldn't be too big of a stretch to think we could develop strains that make terpenes at the same concentrations that you get when you make beer and add hops to them."

Denby's partner in his early work with transportation was Jay Keasling, a pioneering research in synthetic biology and a professor of chemical and biomolecular engineering.

"We started our work on engineering microbes to produce isoprenoids - like flavors, fragrances and artemisinin - about 20 years ago," said Keasling. "At the same time, we were building tools to accurately control metabolism. With this project, we are able to use some of the tools others and we developed to accurately control metabolism to produce just the right amount of hops flavors for beer."

Keasling said Denby and Li managed something distinct in both a business and in genetic engineering.

"Charles and Rachel have shown that using the appropriate tools to control production of these flavors can result in a beer with a more consistent hoppy flavor, even better than what nature can do itself," Keasling said.