How All the Best Car Chase Scenes are Filmed

Baby Driver, James Bond, Fast and Furious: car chase scenes keep you on the edge of your seat. Here's how the best of the best in the genre are filmed.

Gritty, cerebral films with a thick plot and a lot of confusing storytelling devices are great. Nothing is better than sitting down after a feature and talking to your friends about your own theories of what really happened.

But sometimes you're not looking for a brain-bender when you watch a film; some of the greatest moments in film history are good old-fashioned high-intensity action sequences with a lot of smash cuts, shattered glass, broken bones, and explosions. And nothing in the film industry does that kind of excitement better than the tried and true car chase.

Film historians agree that the first real car chase scene, the one that all car chases have been modeled after, was from the 1968 action thriller Bullitt.

This scene shows many hallmarks of modern car chase scenes: tight turns around narrow corners, pivoting in and out of traffic on the highway, and collateral damage in the form of an unfortunate biker, driven off the road. But how are these car chases filmed?

Setting it all up

Cars used in modern car chase sequences are heavily reinforced, having most of the car's frame replaced with heavier steel so that it will both survive a heavy beating, and protect the actor and stunt driver inside.

For these old-fashioned car chases, a number of techniques were used to capture the image that they wanted. For the close-ups, the actual actor would sit in the car and drive around a track with the background heavily out of focus in order to create the blurry outside effect. For the most part, however, stunt drivers were employed to make the sharp and crazy turns that were captured without the driver in view.

Modern car chases, however, use a lot of tricks and techniques to make the action really stand out, to make otherwise impossible scenes a reality. 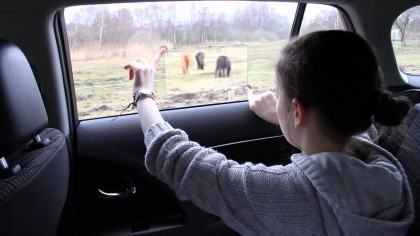 Baby Driver was one of the most exciting films to come out in 2017, and it has several high-intensity car chases, few beating its opening scene. Director Edgar Wright discussed the unique challenges of filming this masterpiece in downtown Atlanta. The team had to film the whole chase a few blocks at a time because it wasn't possible to shut down the entire required area for filming all at once.

Another challenge that must be overcome is that the actors have to look natural during the cuts where they are on screen in the driver's seat. This means that every actor that gets behind the wheel has to have a fundamental knowledge of how the stunts are performed; this is time-consuming and can be dangerous, but it's well worth it to get those shots of pure unadulterated intensity.

But despite all of these challenges, Wright decided to film the car chase scenes in practical locations instead of using a green screen. However, that isn't always the case.

Use of computer generated images

This scene from the Matrix Reloaded marks a dramatic shift in paradigm for car chase sequences in action films. This scene heavily relies on CGI to create extremely dramatic and unrealistic images come to life. Cars flipping end over end, passengers surviving ridiculous crashes, being able to stand up and point a gun despite moving at break-neck speeds -- camera angles make the vehicles seem like they are moving faster than they actually are, and green screens allow for some of the more ridiculous stunts to happen in the studio with harnesses and pads.

But, a significant amount of the effects are still practical; the scene used over 300 cars and 200 driving extras during its filming. Many of the angles are shot traditionally, with a cameraman on a motorcycle moving around the stunt drivers. Some of these shots are extremely dangerous to the driver, passengers, and people around them -- but that's the price of a good car chase scene.

This scene in Deadpool is a perfect example of the surrealism allowed by green screening. Like the sequence from the Matrix Reloaded, a lot is happening on screen during this freeway scene, and the most thrilling parts are when Deadpool is on the screen being thrashed around the interior of the SUV. Obviously, these scenes lean heavily on computer-generated images, because there is no way that Ryan Reynolds would be in a good way after being slammed around like that.

But the mother of all car chase action films, Fast and the Furious, uses mostly practical effects, and the following video talks about another kind of issue that comes up: politics.

Many cities aren't excited about the idea of closing roads used by their citizens and letting action movie producers flip cars, set off explosions, and potentially damage the roads and buildings around them. Some cities see it as a badge of honor to have such an awesome film shot in their location.

The Fast 6 team used some pretty cool technology to get good shots in their film. The highlight of the behind-the-scenes is a giant cannon that fires a police car so that it rolls over the action as its happening. This allows for easy camera placement and tons of awesome stunts.

If your car chase was shot in a practical setting, on a closed track, or in a green screen room, there is going to be a lot of shattered glass, crumpled metal, and broken machinery and set pieces to clean up when you are done (as long as you've done your job right!) But, what happens to all of the cars the set has left over after filming is over?

Well, the red 2006 Subaru WRX from Baby Driver was sold on eBay for $69,000, over 25 times its blue book value. Nothing beats the feeling of getting behind the wheel and pretending you're Baby driving 80 miles down the freeway... as long as you're just pretending!