Blade Runner was an awesome film. It also made some interesting predictions for the year 2019, but which ones were accurate?

Oh man, Blade Runner, what a film. They don't make them like that anymore do they? Any Blade Runner aficionado will know that the film was actually set in 2019 Los Angeles.  So how accurate were the technologies depicted in it? Are we anywhere close only a few years away? Let's take a look.

Can you believe it's been 35 years since this iconic film was released? Blade Runner was ram packed with predictions on the technology of the future, and actually, some were pretty close.

Obviously, with such a visually rich film we'll need to narrow down the list, a tad. In the following article, we'll focus on those technologies that they got spookily right, or close.

In case you haven't seen it in a while, here's the official trailer.

Certain scenes in the film feature video calling pretty heavily. This is not unique to Blade Runner, Aliens anyone? But this has certainly become true.

Obviously, Ridley Scott et al. could not have envisaged the impact something like the internet could provide, but it's an interesting prediction nonetheless. With the massive proliferation of video calling services available to us today, we can probably give this a huge green tick.

Granted we have this technology to hand, literally, rather than public telecoms booths, this has been realized. Well done Blade Runner, and Aliens.

OK, perhaps a little unpalatable, but worth mentioning. You're open-minded, right? Ahem.

Pris Stratton is probably the most terrifying replicant in Blade Runner. She is designated as a "basic pleasure model". Roy Batty, played by Rutger Hauer, certainly believes her affection is real in the film. Granted he is also a replicant, but we digress.

Although we are nowhere near a replicant level AI "pleasure bot" there has been a proliferation of sex dolls of late. Some are more controversial than other of course. We won't touch that with a barge pole for obvious reasons.

Amazingly, we are pretty close to making this as "real" as in Blade Runner, we can arguably say this has also been realized.

Digital signs are pretty common in the Blade Runner universe. A quick tour of LA in 2019 shows a high proliferation of them. Though we are not quite there yet, they are much more common than they were even a decade ago.

Digital signs are becoming ever more common and it is not unreasonable to say that this has become a reality.

OK, perhaps a bit of a stretch, but is it? Anyone who's watched Blade Runner will immediately recall the VTOL police car that Rick Deckard makes use of. It has ground travel capability as well. 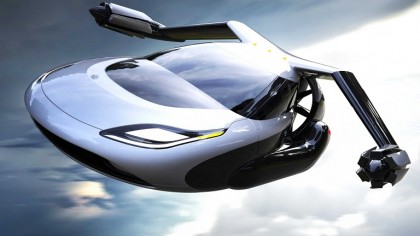 There have been several attempts at melding planes and cars for many decades. But, more advanced and viable ones have been proposed over the last few years. Do you remember the Terrafugia? This was the first prototype flying car to meet FAA and NHTSA standards.

Looking more like a road capable plane than a hover car, per se, it was a good crack at the whip. Recent proposals by Delorean could very well take us one step closer to this vision.

Uber even plan to have a fleet of flying vehicles as soon as 2020, not too far off the mark, we must say.

One of the biggest features of Ridley Scott's masterpiece Blade Runner is the concept of replicants. In the film, these are more synthetic humans than robots, but they are clearly artificial intelligence if nothing else.

AI is becoming an ever more intrusive part of our lives but a key element of the film was the ability to detect them. In the film, replicants do not have a normal emotional range. This can be detected using a device called the "Voight-Kampff" test to measure empathic responses.

Interestingly, this is a direct reference to Philip K Dick's novel Do Androids Dream of Electric Sheep? Which is the original inspiration for the film, fyi.

Our current method of assessing true artificial intelligence tend to be forms of the Turing test. In effect, these tests are designed to "fool" an unbiased third party that they are talking to a human being and by proxy use natural language.

There has been a proliferation of natural language processing chatbots of late and their development is far from slowing down. Given their development to date, it seems feasible that they may be indistinguishable from an actual person by 2019.

Passing the Turing Test might be a stretch by 2019 however.

Again a bit of stretch, but is it really? In Blade Runner, the majority of humans have chosen to live off-world in colonies. These colonies are actually run by private companies. We can well imagine this being our reality in the future.

With the ever decreasing public funding for space exploration, this has opened a niche for private companies to fill the void.

Although we are a long way from actually colonizing other planets in space, there is a definite growth in private sector expansion into this field.

SpaceX and other private ventures are already pushing ahead with delivering commercial options for space travel, amongst other things. It can be argued then, that though we will likely not be living on other planets by 2019, the process has started its inexorable march forward.

So there you go. Blade Runner was an amazing film, and in some parts, a pretty good predictor of our very real future. Of course, we couldn't possibly cover all the technology in the film in this short article, but the above is interesting to mention if nothing else. What the future holds we can never really know, but it is unlikely that the technologically advanced dystopia it predicts will become a reality. By 2019 at least. Have you noticed anything from Blade Runner that has become a reality, or likely to by 2019? If so, let us know below.

Here’s why there was an $11.7M gold cube in the middle of Central Park