You probably use a microwave nearly every single day of your life, but you may not realize just how one works. Many fear that they can give you cancer or harm you in other ways, but why not take some time to learn the science to realize that it isn't how microwaves work.

Microwaves, the waves, are actually a form of energy that is used in microwaves, the appliance, to heat your food. In terms of wavelength and frequency, microwaves fall between infrared radiation and radio waves. In case that form of reference means nothing to you, a microwave is about 12 centimeters from crest to crest or 10^-2 meters. This wavelength is easily absorbed by most foods, specifically water molecules, which cause the food to heat up. We’ll get into the specifics of that soon, but on to the most important question: do microwaves give you cancer?

Despite what your grandma might have told you, the particles that make up a microwave, photons, do not possess enough energy to cause cancer. Similar but more powerful waves like ultraviolet and x-rays possess more energy per photon and can cause cancer.

Now that we understand what exactly a microwave is, how do microwave ovens themselves work? The magnetron is the core technology of microwave ovens. No, it is not the name of a transforming robot, rather it is essentially a high voltage motor for creating microwaves. An electrical transformer converts 120 Volts AC from a wall socket into 4000 Volts or higher to feed into the magnetron. This high voltage heats a filament at the core of the magnetron causing it to release excess energy as electrons. These electrons would normally fly outwards from the cathode (filament) to the anode (positive terminals) but a circular magnet bends them back towards the filament. This bending from the solid state magnet causes the electrons to fly in a sort of loop.

In a grander scale, as these electrons being sent out from the filament and flying in loops, microwaves are created. Essentially, the looping electrons fly past anode terminals continuously. As an electron flies past an opening between anodes, it creates a microwave. Think of it as blowing across the open end of a bottle. 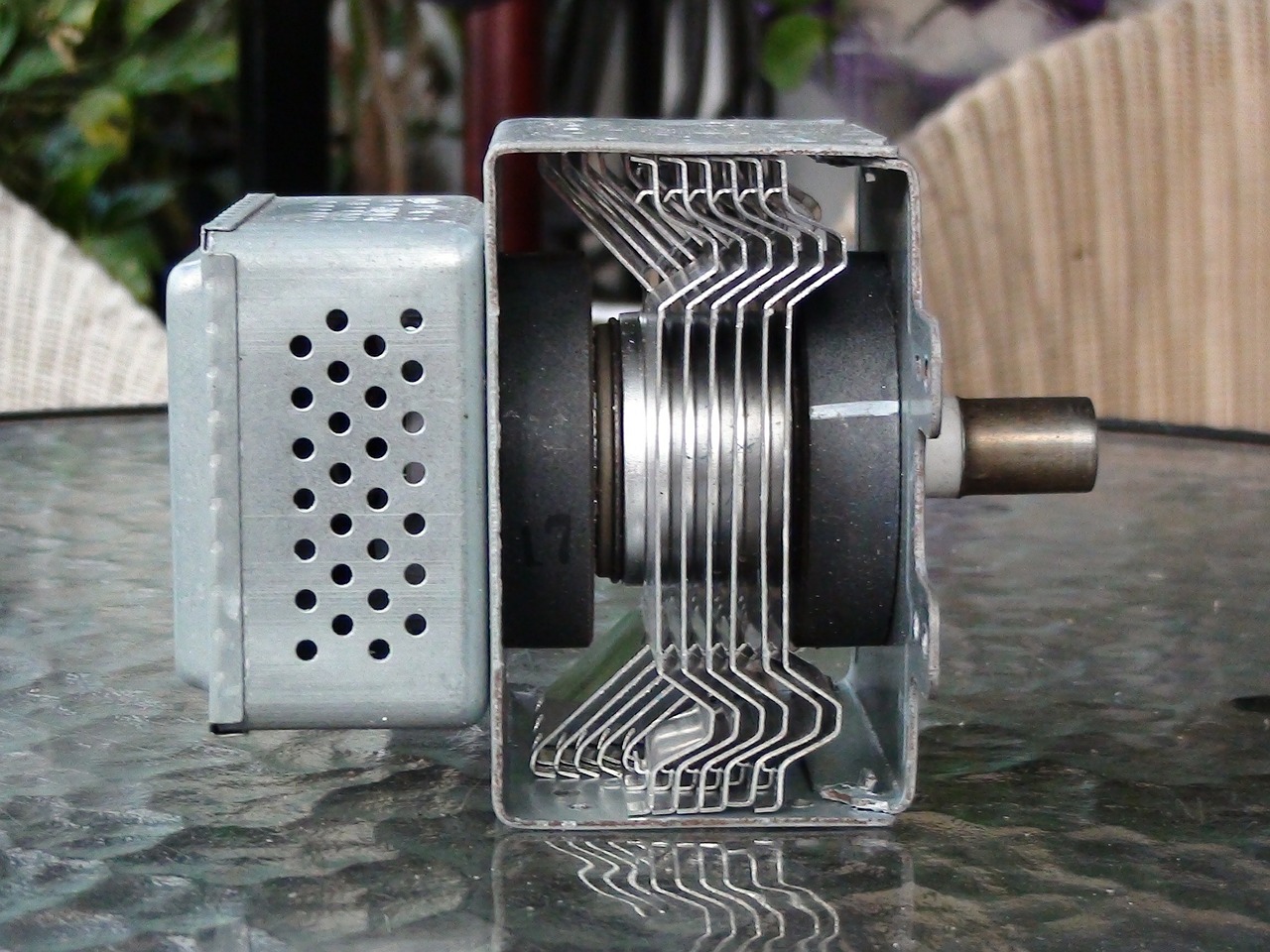 Understanding how a microwave oven or more specifically, a magnetron, creates microwaves is key, but how do these waves then heat up your hot pockets? Well, the microwaves are transmitted from the magnetron through an antenna. The microwaves then bounce around the inside of the metal casing of the microwave in different patterns. These waves are then easily absorbed by the water molecules in food. Molecules absorb the wave which causes them to start to vibrate, converting the energy into heat. Foods that are low in water content aren’t normally affected by microwaves. This is also the core principle behind microwave safe materials.

Digging deeper into why the absorption of the microwave by water molecules causes the food to heat up, we have to look into electric fields. Water molecules, just like magnets, are positively charged on one side and negatively charged on the other. Microwaves are also positive at their top crest, and negative at their bottom crest. As a microwave hits a water molecule, the molecule tries to align itself with the field of the wave. Since microwaves are in fact waves, their positive and negative fields are constantly moving, -2.5 billion times a second in the case of microwaves. This combined with the water molecule trying to align itself with the changing fields means vibration. Vibration means friction and friction means heat.

So we know what microwaves are and we know how they heat food, but why do they heat food so fast and why are there often cold spots in our food?

Microwaves heat food so fast because they cook all parts of food at the same time. A pan cooks food only through conduction where the food is in contact with the pan. Since microwaves pass through every aspect of the food being cooked, it can be heated both internally and externally simultaneously. But, that also means there can be cold spots due to the nature of waves.

This causes “dead zones” in microwaves where no heating occurs. This is why most modern microwaves will include a spinning platter. The spinning moves the food in and out of the dead zones producing more even heating.

That just about covers everything involved in the function of modern microwaves. These devices have become crucial to our daily routine and involve a decent amount of science and engineering. Hopefully, now you’ll never be able to look at a microwave the same way again.