The integrated circuit, a chip of silicon smaller than a fingernailand packed with billions of transistors, powers the modern world. But how is this incredible device made?

The ENIAC computer used 18,000 vacuum tubes, was 100 feet long, and weighed 30 tons but isn’t even close to being as powerful as the integrated circuit that powers a pocket calculator bought at a discount store. The miniaturization of electronics like the transistor on the integrated circuit makes much of the modern world possible. But if one of these circuits packs billions of transistors onto the silicon chip that fits in our smartphones, they must be ridiculously small, so how do you make an integrated circuit in the first place?

So as you can imagine, fitting billions of transistors and other components onto a silicon chip isn’t like soldering wires to a lead, it's a much more involved process.

First, you need to prepare the silicon you want to use for the circuit. The circuit won’t work if there are excess impurities in the silicon chip, so these must be removed before anything else is done.

SEE ALSO: NO MORE TRANSISTORS: THE END OF MOORE'S LAW

In order to do this, an ingot of silicon anywhere from 1.5 inches to 4 inches in diameter is held vertically inside a vacuum chamber with a heating coil capable of very high temperatures encircling the ingot.

The coil then slowly moves down the ingot, melting the region below the settling impurities so that they settle even further, effectively dragging the impurities down the length of the ingot.

By the time the heating coil reaches the very bottom of the ingot, nearly every impurity has been concentrated in this bottom-most section, which is cut off the ingot and discarded.

What you’re left with is an ingot of purified silicon crystal.

Preparing the Wafers for Etching

Next, a thin circular wafer between 0.01 and 0.025 inches thick is sliced off the ingot and the side of the wafer that the circuits will be etched into is finely polished.

The wafer is put under several atmospheres of pressure and blasted with steam heated to about 1830°F (1000°C). This allows the oxygen in the steam to react with the silicon to form a layer of silicon dioxide, the width of which is controlled by the temperature and length of exposure.

Next, a mask is prepared of the circuit design you want to imprint on the wafer. Each wafer will ultimately contain hundreds of individual circuits on them, each one with nanometer-fine detailing, so the circuit mask is prepared on specialized computer drafting software to assist the engineers.

The mask for the first layer of the chip is then optically reduced using a lens onto the surface of the wafer. The mask is clear in some areas and opaque in all the rest, creating the impression of the circuit design.

Etching and Doping the Wafer

The surface of the wafer is blasted with UV light or X-Rays, as these are the only forms of light with wavelengths small enough to irradiate the nanometer-thick, unmasked, clear regions of the wafer.

The mask is taken off and the photoresist is dissolved. Depending on the material, either the masked parts of the wafer are dissolved, leaving the clear parts, or the other way around. Either way, the design of the layer has been effectively etched into the silicon wafer.

Next is the doping process. This is done in one of two ways: atomic diffusion or ion implantation.

With atomic diffusion, several wafers are placed in a tube-shaped quartz oven with a heating element all around it. This heater raises the temperature of the oven to anywhere from 1500-2200°F (816-1205°C).

That element is pumped into the oven as a gas which blankets the surface of the wafers, depositing the dopant on the exposed surfaces of the heated silicon that were left behind by the mask.

This method is best used to dope large areas of silicon to create a layer of P or N regions, but it’s not good for precision work. That is left to ion implantation.

In ion implantation, a dopant gas is ionized and focused into a beam that is then shot at a specific position of the silicon wafer, with the ions penetrating wherever it hits the silicon.

You can control the penetration depth by varying the level of energy supplied to the beam while the amount of the dopant implanted can be controlled by altering the current in the beam and the length of time you expose the wafer to the beam.

This method is very precise but is considerably slower than atom diffusion when you need to dope large areas.

After a layer is complete, the next layer is created in the exact same way as the first though sometimes a layer of silicon dioxide is added between layers to insulate the layers from each other.

This is done by heating the surface of the wafer to around 752°F (400°C) and blanketing the wafer in a mix of silane and oxygen gas. These gases react to one another and deposit a layer of silicon dioxide on the exposed parts of the heated wafer.

After all the layers are laid down in the silicon wafer, a final layer of silicon dioxide is used to seal the surface of the circuit, while etching exposes contact locations and a layer of aluminum used to create pads.

The individual integrated circuits are tested electrically to ensure they are functioning properly.

Breaking the Wafer And Finishing The Individual Integrated Circuits

Using a diamond cutter, perforated lines are cut in between the rows and columns of integrated circuits. Then, it's only a matter of applying stress to the wafer for individual pieces to break off along the perforations. 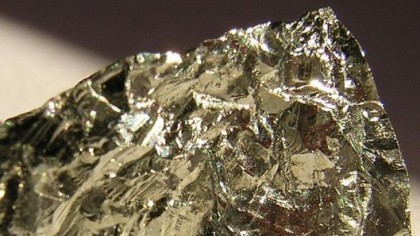 Circuits that didn’t pass the electrical function test are discarded and the remaining integrated circuits are inspected under a microscope to check for physical damage caused by seperation.

If a circuit is in good working order, it is then bonded inside its mounting package—either black plastic or ceramic—and thin wire leads are connected through heat-compression or by using an ultrasonic bonding technique.

The integrated circuit, now complete, is stored in an anti-static bag to be packaged up for sale or shipment.

It’s not exactly carving your name into a tree, but for a process that allows us to etch billions of components onto a chip smaller than your fingernail, it could have been a lot more complicated. Considering how the integrated circuit powers so much of our modern life, we should be grateful that it isn’t.