The Bristol, England, based Blodhound SSC project is looking to break the land speed world record by a further 240 mph and breach the 1000mph barrier. The project is the effort of years of hard work of a team of formula 1 and aerospace experts, with ex-RAF pilot Andy Green ready to get behind the wheel.

The team are confident that the 187,000 hp rocket powered car (more than six times the power of all the cars on a Formula 1 starting grid put together) will breach the 1000mph barrier, but trying to stop it is an even bigger challenge. The engineers have spent hours trying to find a solution to the brakes that need to be able to withstand the huge temperature and stresses from stopping the thin aluminium wheels and they have now homed in on a final design.

Of course, trying to design traditional brakes to stop the wheels at 1000mph is a goal far out reach. At 1,000 mph there will be 15 tonnes of drag pushing against the car and the wheels will be spinning at 10,200rpm, that is 170 times per second! It is clear that more than one braking method is needed. 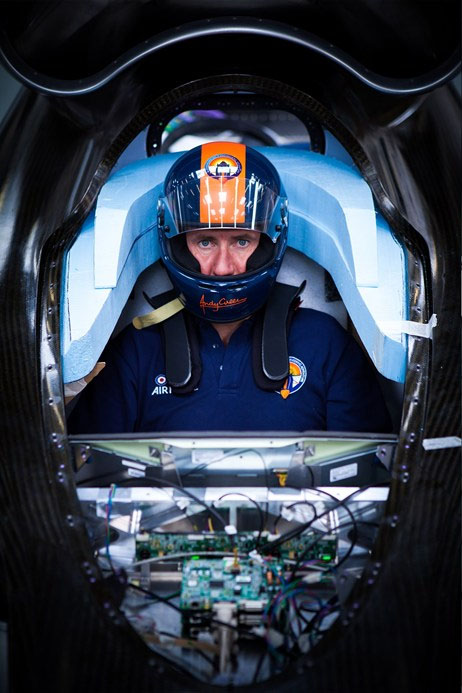 The plan is that when the jet and rocket engines switch off the 'car' will quickly decelerate from 1000 to 800mph, at which point the air brakes will be deployed along with the parachutes to provide a constant 3G deceleration. To put this into perspective, it's like stopping from 60 mph to stop in one second, but for pilot Andy Green it will last for 20 seconds. The last section, from 200mph to 0 is where the problem lies.

The engineers are going to have to produce the world's strongest brakes. Attempts to use high-performance carbon rotors from a jet fighter in the form of car-like disc brakes shattered at speeds of just half of that required. This left just good old steel as the material of choice.

The steel pads are provided by AP Racing and so far according to tests, they seem like they should be up to the jobdespite reaching temperatures of over 1,500 degrees fahrenheit in testing. Not only that, it seems they may be able to be used more than once, which is crucial for the record as the requirement is to turn 180 degrees and return to the starting position.

The current land speed record stands at 763.035 mph, set byBloodhound's pilot Andy Green back in 1997 in the ThrustSSC. The Bloodhound will beat this record by some distance if it is successful.

How a Formula 1 Pit Stop Check Lasts Only Two Seconds