How Face Masks Gave Back Wounded WW1 Soldiers Their Dignity

During WW1, tens of thousands of men were permanently disfigured. The only way to return to society was to wear face masks.

The First World War would claim the lives of millions of soldiers and civilians. For those who survived but were horribly disfigured some were lucky enough to be given tailored face masks to help their rehabilitation back into civilian life.

But these 'lucky' few were not the norm. Many tens of thousands more would spend the rest of their lives constantly reminded of their time on the front.

We would like to dedicate this article to the millions of soldiers who fought and died on both sides of the conflict. We shall never forget your sacrifice.

"They shall grow not old, as we that are left grow old:
Age shall not weary them, nor the years condemn.
At the going down of the sun and in the morning,
We will remember them.” - Laurence Binyon

The dead were the lucky ones

The First World War, far from "being over by Christmas", would prove to be one of the bloodiest conflicts in history. By war's end, millions of soldiers and civilians would be dead and many more physically and psychologically scarred for life.

Young men, many just young teenagers who'd lied about their age to enlist, would be slaughtered on an industrial scale.

But many would consider them the lucky ones.

Prior to this horrendous war, most battlefield injuries were caused by small arms and sword cuts. Facial injuries were usually of little concern to survivors who were simply happy that they'd survived the encounter.

But the weaponry unleashed on the front lines during WW1, like heavy artillery, machine guns, and poison gas, would change all that forever. The stalemate of the Western front and trench warfare tended to increase the propensity for facial injuries as soldiers peered over the parapets.

But many more sustained their horrendous injuries in no man's land. Here they often had no cover as they were bombarded, en masse, with shrapnel shells.

Their explosions would send searing hot flying metal in all directions, tearing through flesh like a knife through butter. Many of their friends and comrades were later tasked with searching for the wounded or collecting pieces of the fallen for burial.

This task fell to men on both sides, like the author's grandfather.

Whilst many were killed outright, others would survive their horrendous injuries and return home, forever mauled by war. Often parents would not be able to recognize their returning children, and were, all too often, horrified by their injuries.

The brave young men would have to live with their severe disfigurements for the rest of their life.

Why were the masks created?

Battered war veterans' home nations would attempt to help them as best they could. For example, in the United Kingdom, disfigured soldiers were often the only soldiers who were entitled to a complete war pension.

Those men with "very severe facial disfigurement" were seen as have their "sense of self and social existence" completely compromised by their service to the country. They were often almost condemned to a life of isolation unless surgery could be performed to fully or partially repair the damage.

This was not always of their own making. For example, a hospital that treated WW1 veterans in Sidcup in the UK painted some benches blue. 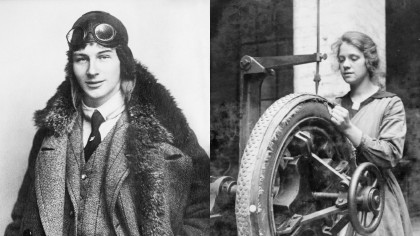 5 Inventions of WW1 and The Engineers Behind Them

This was used as a code so that local people received forewarning that men sitting on it were likely to be distressful to look at.

An American surgeon working in France at the time also noted that "the psychological effect on a man who must go through life, an object of horror to himself as well as to others, is beyond description,".

"It is a fairly common experience for the maladjusted person to feel like a stranger to his world" he continued.

Whilst some were treated in the field with early forms of plastic surgery, this was nowhere near as sophisticated as it is today. Surgeons would often struggle to help their patients beyond simply stitching gapping wounds together without being able to take account of the amount of flesh lost.

As these wounds healed and the skin tightened, their once proud faces would be morphed into hideous grimaces. Many would also lose whole parts of their head leaving a hole where their nose once was, or completely losing their jaw.

For many to at least partially return to normality there was only one practical solution left - face masks.

Who created the masks?

At this time, reconstructive facial surgery was not an option. The skills, knowledge, and tools simply didn't exist.

The only plausible solution for these unfortunate men was the use of specially designed masks. There is one person in particular who is credited for her fantastic work in this field - Anna Coleman Ladd.

Anna was an American sculptor in Manchester, Massachusetts. During the war, she would move to Paris with her husband, Dr. Maynard Ladd, in 1917.

She would devote her time throughout the war to helping these poor souls.

Whilst in France, she was introduced to the work of Francis Derwent Wood. At the time, he was working in the "Masks for Facial Disfigurement Department" in Paris.

Soon after, she would found her own Red Cross "Studio for Portrait-Masks" in Paris. Here she would begin to help hundreds of badly injured soldiers from the front.

Anna would begin the process by taking plaster casts of the soldier's faces, usually in her Studio in Paris. From there, she would be able to craft copper full or partial masks to blend with any part of the soldiers face unscathed by war.

Once complete, these copper pieces were painted using hard enamel to match the soldier's skin who would wear the prosthesis. Real hair was often used to synthesis eyelashes, eyebrows, and even mustaches.

Each piece weighed something in the order of half a pound (approx. 227 grams).

They were held in place by either tying them directly to the patient's head or by hanging them from a pair of eyeglasses. Anna would become very adept in her skill.

Eventually, she was able to create casts purely from images or photos of the wounded before they were disfigured. The brunt of her work focussed on French soldiers.

From the 3,000 or so wounded in need of facial masks, Anna was able to single-handily craft 185. For her labors, she was honored by the French Government with the Chevalier of the Legion of Honor.

What happened after the war?

After the war, the technique developed by Anna would go on to be given an official term, Anaplastology. This is officially a branch of medicine that deals with the prosthetic rehabilitation of any absent, disfigured or malformed anatomically critical part of the human face.

As for Anna herself, she returned to America after the armistice but her studio continued. It would begin to falter in 1920 and soon after it was closed for good.

Sadly there are no records of the men who wore the masks after the war. But what seems to be clear is that the prosthetics had a very short shelf-life.

Anna would write in her notes at the time of one of her patients that "he had worn his mask constantly and was still wearing it in spite of the fact that it was very battered and looked awful."

The vast majority of these masks have since been lost. Many have come to the conclusion that they were buried with their owners when they died.

Back in the states, she would continue to sculpt, often making bronzes very similar to her pre-war pieces.

She would later die at the grand old age of 60 in Santa Barbara in June of 1939.

Work, like that of Anna, in battlefield medicine and rehabilitation, would lead to enormous advances in many branches of medicine. This would be accelerated even further, when just a few short decades later, the Second World War would break out.

Post-war medical techniques, including anaplastology and plastic surgery, have improved spectacularly. Yet, despite this, modern techniques can still not adequately treat the kinds of injuries seen during the "Great War".