How Grace Hopper Laid the Foundation for the Information Age

The number of women in computer science fields has been in the news a lot lately as companies like Google and Facebook face repeated criticism for their relative lack of diversity when it comes to women and other under-represented groups.

For many, this might give the impression that women haven’t been at the cutting edge of innovation in science and technology, but this is the exact opposite of the truth. Without the incredible work of Grace Hopper, the world would be a radically different place than it is today.

Grace Hopper was a pioneering force in Computer Science and was recognized as such even while she was alive, so we wanted to look back at how her work developing programming best practices, compilers, and ultimately the COBOL language gave rise to the modern Information Age.

Prior to Grace Hopper, computers were little more than massive calculators built to perform complicated arithmetic. While she wasn’t the first to recognize the unharnessed potential of these machines, her work is what transformed computing into programming, which opened the door for everything from word processors to video games to the Internet.

After leaving Harvard University where she was a computational research scientist as part of the US Navy Reserve, Hopper began work at Eckert-Mauchly Computer Corporation in 1949. There, she helped develop the UNIVAC I, the first large-scale digital computer in the United States.

Hopper was instrumental in instructing and training the first generation of computer programmers, encouraging them to collect and share software code that performed specific, routine tasks.

This reusable, modular code concept not only saved time by reusing the same code time and again, but it also helped to refine the code to be more efficient, a practice still universally followed in computer programming today.

This innovation allowed programs to do more than simply compute values and is how programmers can write code that uses words instead of just numbers and mathematical operators.

This last part is especially important, since introducing human-readable language into program code made the program easier to understand, follow, and maintain and was the foundation of probably her most lasting contribution.

COBOL Takes Over the World

Hopper was light years ahead of the computing world when she believed that computer programs could use English language words rather than opaque symbols and numbers. 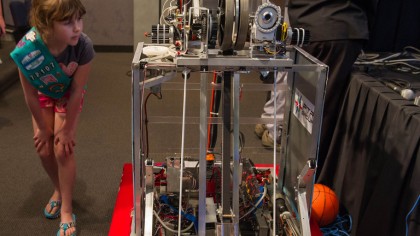 Her work on the UNIVAC led to the development of the FLOW-MATIC compiler, which was built to convert a business-oriented programming language into UNIVAC readable binary code, allowing for the automating of complicated billing and payroll tasks.

Using her compiler, Hopper was able to show how UNIVAC machines could read twenty English language statements and carry out the instructions.

When she pressed for entire languages to be developed using Words, she was condescendingly told that this wasn’t possible since computers can only understand binary code—after having demonstrated that computers could be made to understand English language statements.

It took a few years for her work to be taken seriously, but once she was able to publish her paper specifying her compiler in 1952, the stage was set for her revolutionary innovation.

In order to advance the adoption of UNIVAC systems for business application, there needed to be a standardized language that the machines could run that was easy enough to program that businesses could design programs that suited their needs.

This provided the perfect opportunity for Hopper to show the world that her approach to programming using English language statements was the only way forward.

She was one of the driving forces behind the committee that developed the first common business-oriented language that was built largely off her previous work with the FLOW-MATIC compiler.

In 1959, the first specification for COBOL was published, providing the world with the first high-level programming language built around English statements that were compiled into machine code, the forerunner of every modern high-level language in use today.

Hopper became the leading advocate for its widespread adoption and succeeded in converting the world to COBOL.

The US Navy brought Hopper back to active duty status to help convert the entire service’s computer systems to this new standardized language, where she worked to write the manuals and tools that would make the transition to COBOL possible.

From there, industry and government agencies converted their operations to COBOL and continue to use the language to this day.

The list of awards Grace Hopper received is too long to list here, but some highlights include:

-the Data Processing Management Association awarding her its first-ever Computer Science Man of the Year Award in 1969—an eye-rolling irony if there ever was one—,

-the British Computer Society named her a Distinguished Fellow in 1973—the first American and the first woman of any nationality to receive the honor—,

-and as recently as 2016, Hopper was posthumously awarded the Presidential Medal of Freedom by then-President Barrack Obama.

When she retired from the Navy in 1986, she was the oldest active duty officer in the Navy and upon her death in 1992, she was interred in Arlington National Cemetery in Washington, DC, having attained the rank of Rear Admiral and having been awarded the Defense Distinguished Service Medal, the highest honor possible without having served in active combat.

Without Hopper, modern computing would not be what it is today. Every language taught everywhere from code academies to the most prestigious universities in the world are a direct result of her pioneering work.

Her name belongs beside Alan Turing and John Von Neumann’s in the annals of Computer Science. We want to stop and acknowledge that the world we live in today is ultimately Grace Hopper’s greatest legacy.

How Far Space Telescopes Have Come, How Far They'll Go