Have you ever wondered how tech giants work smart, not hard? Well here are some examples of how you can improve your productivity today.

All work and no play makes you a dull person, as the saying goes. In fact, the effects of working too hard can also be profound: long hours, increased stress and anxiety, strained relationships as well as decreased productivity and dissatisfaction with work. So why not work smart, not hard?

With that in mind here are seven ways tech giants work smart, not hard.

In his book The 7 Habits of Highly Effective People, the author Stephen R. Covey tells an interesting story. The story is about a lumberjack whose saw gets blunt over time yet he continues to try to cut wood. If only the lumberjack took a break and sharpened his saw he would find he would be far more productive over the long run.

Sharpening your own saw, so to speak, is a great habit to introduce into your own life. Learn to take regular breaks every 90 minutes or so. On average, the human brain can sustain focus for around this time and then needs about 15 minutes 'downtime' to refresh. It's called ultradian rhythms.

Regular breaks like this let you refresh your mind and reset your attention span.

Current research seems to indicate that taking naps allows for an improvement in cognitive function. They also improve creative thinking and aid in memory recall. Naps, in fact, benefit the learning process by helping you take in and retain more information. They solidify the things you've just learned. 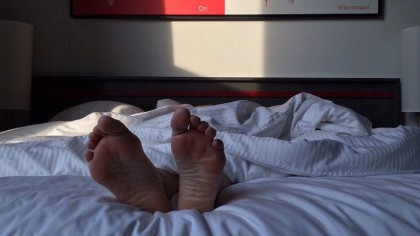 "Research indicates that when memory is first recorded in the brain--in the hippocampus, to be specific--it's still 'fragile' and easily forgotten, especially if the brain is asked to memorize more things. Napping, it seems, pushes memories to the neocortex, the brain's 'more permanent storage,' preventing them from being 'overwritten.'" says Gawker editor in chief Max Read.

Another test found that napping participants performed much better than those who didn't.

3. They spend time in nature

Spending time in nature is a great way to reset your attention span and generally relax. At least according to Daniel Goleman, author of Focus: The Hidden Driver of Excellence. In his book, Goleman describes one experiment that highlights the power of nature to help you work smart, not hard.

The test compared sets of people who walked down a street and those through a park. The study found that there was a marked difference in attention spans between the two. In fact, those who walked down the street weren't able to 'reset' their mind at all.

This appeared to be due to the fact that city streets are busy places full of distractions and constant needs to navigate.

Spending time in nature, on the other hand, is far less stressful and taxing. This lets you fully relax and unwind, meaning you'll focus more easily when you return to work.

Also, other research has found that for students, motivation to learn is higher when they are outside instead of in a classroom.

Ok, this one runs counter to some popular beliefs but with an ever-increasing amount of remote workers means this is becoming a necessity. It helps you become more productive and better plan your workday.

Working as part of a remote team also means that working hours can be completely out of whack. Half the team could be sleeping whilst the others are working. In these situations its vital to 'check in' before you get started. That way you won't duplicate work or waste your time on something already taken care of.

This kind of habit will let you deal with the most important things first. Then you can pick off other easy wins as well as complete your personal to-do list.

5. Move and work in chunks

An ever increasingly popular work method is to move locations regularly throughout the day. You can set up at various cafes, workspaces or even pubs to perform certain tasks throughout the workday.

Of course, you'll need a clear thought-out to-do list as well. You can even create a plan of what to accomplish at each location. For this system to work effectively, it's important to know when to stop. This should be task-based rather than time-dependent.

People who've tried this system swear by it. They noted that they have been more productive, more active during the day, and working fewer hours since they started this process.

6. They know when to quit

We've all done it. Spent an inordinate amount of time on a task that ultimately was a waste of time. The sooner you realize a task is pointless the better and never feel bad about quitting it.

Steve Jobs himself wasted a significant amount of time on the LISA computer. He eventually realized it wasn't going to have the impact on personal computing he'd hoped.

So he promptly stopped working on it and moved his attention to the Mac. Although Apple continued plugging away at the LISA for a little longer eventually hundreds were simply sumped in a Utah landfill.

So there is no shame in admitting defeat, just quit whilst you can.

Delegation is one of the most critical skills anyone needs to learn ASAP. Especially if a task doesn't fall within their particular area of strength. Of course, some tasks should also be delegated if they will divert focus away from something more important.

In these cases, workloads and tasks should be passed to someone better suited to take care of it. You don't need to do everything yourself!