How the World Can Go Carbon-Emission Free: 15 Projects Shaking Up the Energy Industry

Here are the projects and innovations bringing us closer to a green future.

We've never been closer to becoming carbon-emission free than we are right now. All across the globe, governments, scientists, and private companies are hard at work to implement initiatives and strategies to make the world a greener place.

From building materials to large-scale energy generation plants, the thrust towards a clean energy revolution is taking many forms. Here are just some of the projects that are making a big impact.

1. TuNur: Powering Europe From the Sahara

Solar power is one of the leading technologies when it comes to going green. It's affordable, reliable, and we've only scratched the surface of its capabilities. One project looking to show how revolutionary solar power can be is TuNur.

The company wants to build an enormous solar farm in Tunisia, which will utilize the strong sunrays over the Sahara desert. The power generated will be transferred to Europe via submarine cables. Time will tell if the project gets off the ground, but the prospect of using desert heat to power a continent is exciting.

TuNur isn't the only one looking to invest in massive solar farms. Oceans of Energy is another company specializing in solar power, though Oceans of Energy prefers to build its farms at sea. Its project, Solar-At-Sea, seeks to create a floating solar farm off the coast of the Netherlands.

The project will begin with testing stages, as the reliability and stability of the equipment need to be measured at sea. The plan is to have constructed 2,500 square meters (26,909 square feet) of solar panels by 2021.

A lot of people wonder how they can transition to using renewable energy in their homes, without having to wait for a widespread national roll-out of green initiatives. Huawei is attempting to make this transition easier for homes with their Fusion Home Smart Energy Solution.

The product, which was launched earlier this year in Australia, allows people to both generate and store their own clean energy. It does this through a combination of solar panels and monitoring systems, as well as a Smart Energy system which communicates between the solar panels and the appliances in your home. This way, energy use is optimized and nothing is wasted.

4. Electric Wallpaper: Generating Power From Inside Your Home

In November of last year, scientists at Imperial College London devised a wallpaper that could generate and store energy. The innovative interior decorating material was made using circuitry and cytobacteria, which were printed using a standard inkjet printer.

The cytobacteria in the ink perform photosynthesis, which generates the energy in the wallpaper. Though the energy generated from photosynthesis is relatively low in volume, the scientists behind the project feel that there's a lot of potential for projects like this and other examples of bio-solar energy.

One of the biggest issues currently facing renewable energy is storage. This breakthrough by researchers at the Korean Advanced Institute of Science and Technology (KAIST) could help address some of green power's storage problems.

In March of this year, KAIST researchers successfully created an energy storage device that charges in just 30 seconds, and is capable of maintaining stability. The storage device is also aqueous, meaning it's more environmentally-friendly when compared to popular lithium-ion batteries.

In April of this year, CalTech scientists developed bacteria that could create energy-packed carbon structures. These carbon structures could then provide the foundations for other materials.

What makes this breakthrough exciting is its potential in cleaning up the chemical manufacturing process. Scientists believe that we could soon have the ability to "program" bacteria to create chemical compounds, without the need to build chemical plants that are harmful to the environment.

7. Converting Car Exhaust Into Electricity: Driving Towards A Greener Future

While electric cars are gradually growing in popularity, many of our roads are still dominated by traditional combustion engine models. While cars are known to leave a pretty damning carbon footprint, there could be a way to utilize their exhausts to generate clean energy.

Scientists at Washington State University have found a way to convert the heat from car exhausts into usable energy. This represented a huge breakthrough in the field of thermoelectrics, which seeks to convert different heat sources into electricity. While storage is still an issue, this opens the door for a whole new avenue of clean energy production.

8. Solar Paint: Powering Homes With A Lick of Paint

Powering your home with roof-mounted solar panels is one thing, but what if the exterior walls of your home could generate electricity? Scientists from RMIT in Australia have devised a solar paint that can convert water and sunlight into usable hydrogen, which can be used to generate power.

The paint contains titanium dioxide, which absorbs solar energy and moisture. It then breaks down the moisture into hydrogen and oxygen. Once a structure is painted with the paint, it effectively becomes a hydrogen energy plant. The paint is expected to be available commercially in the next 5 years.

9. Power Generating and Storing Roof: Powering From Above

Solar panels aren't the only way to turn your roof into a power-generating station. Researchers in ETH Zurich, Switzerland have devised a concrete roof that can generate solar energy.

The self-supporting roof contains a thin layer of photovoltaic cells. It also contains a layer of insulation and temperature-regulating coils. All this combines to allow the roof to generate and store solar energy.

Solar power is fine when the weather is good, but what happens on rainy days? A newly designed form of hybrid solar cells are seeking to generate energy not only from the sun, but also from raindrops.

Research published in ACS Nano in March of this year revealed that triboelectric nanogenerators (or TENG) could be the answer we've been looking for. TENGs can utilize the kinetic energy of raindrops hitting the surface of the panels to generate energy, even when the sun isn't out. This could pave the way for widespread use of hybrid cells in the future.

Carbon emissions aren't the only culprits when it comes to damaging the environment. We're dealing with a global waste problem, and many nations are hoping to creatively address both issues in one fell swoop.

Dubai and China are just two places dedicating themselves to building waste-to-energy plants, that will incinerate solid waste and use the resulting heat for energy generation. Similar techniques are already in use throughout Europe, and could spell the beginning of a worldwide trend to combat pollution and emissions.

Every day we're wasting energy without even realizing it. When your laptop becomes warm, or when your phone heats up during a charge, that heat is an indication of wasted energy.

With this in mind, engineers at the University of California, Berkeley, devised a device that could convert this wasted energy back into usable power. The device is a thin film that can harvest the energy from heat, and make it usable again. It's a stunning breakthrough, that has the potential to make our devices more energy-efficient.

Last year saw the official launch of Scotland's Hywind Project - the first floating windfarm to successfully generate energy. The project hopes to power 20,000 homes, and is part of a broader Statoil initiative in the UK to power as many as 650,000 homes total.

The turbines are held in place with chains, submerged under the water. Floating installations like Hywind provide the possibility of wind farms to areas where fixed bottom installations aren't possible. This means that wind farms and wind energy can become more accessible and readily available across the globe.

Speaking of floating energy-generating systems, engineers from Columbia University unveiled an exciting floating solar rig in December of last year. The proposed rig would use solar energy to harvest hydrogen from seawater, allowing it to then be used as fuel.

Like the previously mentioned electric wallpaper, this would allow us to utilize hydrogen in a way that previously wasn't possible. Hydrogen is plentiful, clean, and an ideal fuel. But until now, it wasn't energy-efficient to harvest it. Innovations like these could make it possible for us to power the world with hydrogen.

Though it's certainly time to retire fossil fuels like coal, that doesn't necessarily mean we need to retire the mines they were harvested from. 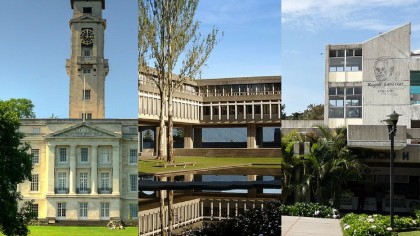 Their plan is simple - they want to suspend massive weights down the existing mineshafts, and use the movements of these weights to generate energy. It's a clever idea, and one that is cost-effective too given that the infrastructure is already in place. Creative ideas like these could allow us to cheaply and easily incorporate more clean energy solutions worldwide.

Instead of a reciprocating piston, their engine design uses a rotating shutter which acts as a double-acting piston. The shutter has an opening which works as a space for the working volume. This shutter freely moves inside an insulated housing and provides a large surface area for the heat transfer, enabling larger cylinder volumes. The capacity of this engine can be scaled by stacking more shutters, each having their own working volume. A good area to volume ratio also means that the Energy Converter can function even with lower temperature differences. As such, the engine has the potential to be used for a range of applications including industrial waste heat to energy conversion, continuous high-power energy generation for off-grid work, and many more.

This innovative engine is still in its conceptual stages. The company is planning to develop a proof of concept soon and is looking for partners to fund and bring this revolutionary concept to reality.