How to Film Tank Shells in Flight and in Slow Motion

Executed correctly, and slow motion reveals an extraordinary side of life typically missed by the human eye. But beyond providing enthralling content for dramatic movies and short clips, slow motion serves an important purpose in helping scientists understand the things which travel really, really fast.

There are many ways to capture slow-motion video, and most basic setups are far more than sufficient enough to capture a balloon popping, or a bullet disintegrating as it strikes a plate. 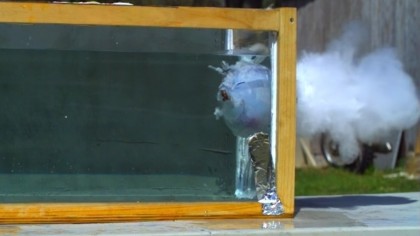 But there are many phenomena which occur far too fast and travel significantly farther than most slow-motion cameras can capture. Specifically, filming tank shells in flight and nuclear explosions, both which are of military interest, require many extra layers of engineering and clever camera tricks to capture moments unfathomably faster than a blink of an eye.

Even today, only the finest cameras - mostly restricted for academia and military use - have the ability to film the first few seconds of an atomic blast, or record the full range of a tank shell in flight from the moment it leaves the barrel to a point a hundred or so meters down range.

Achieving such videos in the 1950’s would seem laughably impossible, but excited by unprecedentedly massive nuclear explosions never seen before on the planet, and with a chance of witnessing a never-before-seen side of science, researchers quickly developed ingenious methods on how to observe the first few instances of a nuclear explosion, and tank shells in flight.

Through their methods, scientists were able to record tank shells in flight like this:

How Tank Shells in Flight and Nuclear Explosions are Recorded

Modern technology offers a few methods for capturing lighting quick moments. But post-WWII, there were no such technologies - scientists had to engineer entirely new devices to capture ultra-high speed events, like tank shells in flight, or the first few microseconds of an atomic explosion.

It is important to note that the technologies developed to record nuclear blasts and tank shells in flight were developed entirely separate from each other decades apart. Surprisingly, the rapatronic camera developed to capture the first microseconds of a nuclear explosion was developed 40 years before Projectile Following Systems (PFS) would enable researchers to capture a tank shell in flight.

Many would be wrong in assuming tank shells could be captured in focus and perfectly centered simply by rotating a camera in sync with a tank firing a shell off. But investigating the issue closer reveals a problem most videographers struggle with all too often; motion blur.

When a camera takes an image, a shutter lifts up to expose a sensor with light. The shutter speed, the time of which it takes for the shutter to open and close, impacts the amount of light which reaches the sensor. Increasing shutter speed, or reducing the time the sensor is exposed, allows for a sharper image to be taken but comes at the sacrifice of brightness.

Decreasing the shutter speed, or increasing the amount of light which reaches the sensor, improves brightness, but if the object moves just a few millimeters while capturing a picture, motion blur is introduced - a fuzzy artifact which ruins most pictures (not to be confused with Buka, the beautiful blurring of a background of a photo).

Recording a Sharp Video of a Tank Shell

A tank shell comes out of a barrel traveling at a whopping 1.5 - 2 kilometers per second. Twisting a camera fast enough to record the shell in flight would introduce vibrations and shake which would ever so slightly alter the composition of the shot, enough to ruin it with blur. Moreover, accelerating such a delicate piece of machinery worth hundreds of thousands of dollars would undoubtedly damage the sensors with each use.

Tank shells have been captured in flight before with still photography - a single photo capturing just one moment in time. However, recording enough frames per second, along with maintaining a shutter speed fast enough to freeze a shell within each frame proved to be a difficult task.

Ordinary handheld cameras can capture images in approximately 0.1 milliseconds - fast enough to freeze any stream of water in place or capture a ripple as it travels over someone's face after they are hit. But if a tank shell were flying in that time frame, it would have traveled nearly 200 millimeters, enough to blur the shell by about 40%. Even if a camera taking a picture with a shutter speed of 10 microseconds still is inadequate for useful research, not to mention falls far beyond the capabilities of ordinary photography.

The answer to the blur problem lies in a technique discovered which revolves around mirrors. A new projectile focusing system, reported by the US Army Ballistic Research Laboratory in December 1986, used a system of mirrors to track and reflect an image of a projectile to a stationary high-speed camera.

It was a system of perfect synchronization timed down to the millisecond and was able to capture tank shells in flight, perfectly in focus and in frame every time. It was a magnificent achievement based on layers of stacked engineering to produce a final, smooth video of a tank shell flying out of the end of a barrel.

How a Projectile Following System Works

The camera developed to record the tank shell in flight was not overly spectator in and of itself. In front of the camera, however, was an ingenious projectile focusing system consisting of a server-driven motor which could be rotated in sync with the speed of a projectile reflect an image which when viewed through the mirror, appears stationary to the camera.

In practice, the mirror reflects an image of the projectile over a 90-degree rotation, capturing the shell in flight for 100 - 200 meters. It is an impressive feat and would be entirely impossible if it were not synchronized down to the millisecond.

Timing a Projectile Tracking System Down to the Millisecond

Maintaining the focus and centering of the projectile over the 200 meters of potential coverage requires sweeping the mirror at an angular matching the exact angular rate of the projectile, as viewed from the camera. But even having the ability to record a smooth image of a high-speed projectile would be useless without having a reliable system to initiate the projectile tracker.

The researchers who developed the technology needed a way to synchronize the system to the projectile, so that as it left the barrel, the mirror tracks it until it is out of the desired range. Simply timing it to the moment the trigger is pressed is impossible since the bullet leaves the barrel at unpredictable rates.

“The firing pulse for tank gun ammunition occurs about 13 milliseconds prior to the round emerging from the muzzle of the gun; however, there is an uncertainty in this time of as much as several milliseconds. This uncertainty won't do for initiating the PFS (Projectile Focusing System). As shown previously, time synchronization must be good to 0.1 ms in order to *capture" the projectile in the field of view of the camera and keep it there over the entire period of the event (0.1 second).” the US Army Ballistic Research Laboratory reports.

Instead of relying on the trigger, researchers attached 'Hoop' strain patches near the base of the barrel. When the tank fires a round, a pulse is produced which occurs approximately 4 milliseconds prior to the projectile leaving the end of the barrel. Attaching two patches allowed researchers to determine the muzzle velocity to input into the PFS.

In 0.1 of a second, the tank fires a shell sending it approximately 167 meters down range. The mirrors track the projectile in that time with less than a 1% degree of error, sufficient enough for metrical photography. Then, it is all over.

The Point of Recording Tank Shells in Flight

At face value, recoding tank shells with such high levels of precision and accuracy appear trivial. However, the research helped significantly reduce the cost of research and development into developing tank shells, specifically ones guided with fins. The ability to observe every moment of a tank shell as it travels unveils any potential problems.

Instead of tinkering with hypotheticals and running through checklist procedures, scientists could instead simply investigate the video to discover the issue, implement a fix, and have it ready for operation the next day.

Also, it makes for incredible footage. However, it is not the only magnificent technology of the 1900’s to capture pristine footage of moments which occur in less than a blink of an eye.