How To Get Your Car Running in Extremely Low Temperature Weather

Should you let your car idle before hitting the road? Experts say the best way to heat up your engine is to start driving, and idling your car could actually cause damage.

While Australians are suffering from record high temperatures, citizens of the U.S. are experiencing the exact opposite: a frigid, unforgiving winter. Temperatures have gotten so low in New York City that the Hudson River froze over, an event that hasn't occurred since 1867.

And for morning commuters, sudden and extreme drops in temperature can lead to a nightmare: a frozen engine block. Engines that rely on internal combustion generate a lot of heat, and that heat can damage sensitive components in the vehicle and lead to fires or explosions. A coolant, such as water, is used to absorb some of the heat and prevent pressure build up.

There is a huge problem with using water as a coolant at very low temperatures. When water freezes, it expands, and this can prove catastrophic for engine blocks, denting or even destroying components. That's why we use anti-freeze, a chemical that (as its name suggests) prevents the coolant from freezing. However, anti-freeze is only good until temperatures of -35F, at which point nothing can save your car from the vicious onslaught of nature.

So what do you do when your car's engine has frozen, either because of an incorrect application of anti-freeze or because the polar vortex sucked all the heat out of the world?

Conventional wisdom is not common sense

Many people think that turning on their car and letting the engine heat itself up is the best way to deal with this problem. And why not? If the coolant is freezing, heating the engine up is sure to melt it quickly!

Not quite. Old carburated engines worked this way, so if you know that your car is an older model and still contains a carburetor, you're better off idling for a bit or else your car will stall out. But modern engines with electric injectors actually inject more gasoline into the fuel mixture to compensate for the low temperature -- this gasoline rich mixture can act as a solvent and strip oil from the inside of the engine, causing problems for the pistons that generate a lot of friction during the fuel injection process.

So, don't idle your engine. Instead, if your vehicle starts and the engine isn't overheating, the best solution is to start driving right away. This will heat the engine up and allow it to get to the proper temperature much faster than idling the engine ever would.

Be gentle with the throttle at first because the cold will still affect other parts of the engine. There is no sense in pushing down on the peddle and burning a ton of gasoline.

If your engine does start to overheat, though, you have some serious issues to consider.

Check conditions, get to safety

First of all, we're not talking about sweater weather here. Temperatures low enough to freeze coolant with anti-freeze in it are extremely dangerous, so if you're out there trying to do quick maintenance on your car, make sure you're extremely well prepared. 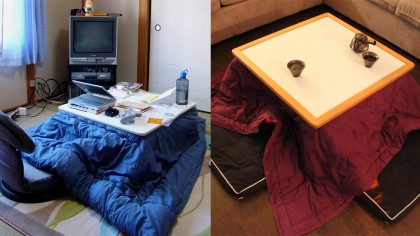 Second, this kind of weather can also be treacherous to drive in as it is often accompanied by icy roads, cold fog, and snow. When you do eventually get your car running, things are going to be a little uncomfortable on the road, so make sure you can see properly and your tires have enough grip to get you to your destination safely.

Keep an eye on the temperature gauge on your dashboard. If the engine starts to overheat, you should turn your vehicle off immediately; frozen coolant in the radiator can cause an explosion, destroying the engine and possibly causing serious injury. At this point, it would be best to go back indoors until it is safer to drive. But, sometimes that isn't an option.

Try to thaw the engine block

Now, if you've checked your environment, are fully prepared, and are sure that you absolutely have to drive your vehicle right now, there are a few things you can do to get the car up and running. If you have access to a garage, the best solution for you might be to use a space heater or some other device to try to get the ice in the engine to thaw faster. Again, practice extreme caution if you try this: any method of heating up the engine block will probably be dangerous around the water that runs off due to melting.

After the coolant has melted fully, drain it and replace it with a 1:1 mixture of water and anti-freeze. At this point, if you don't have anti-freeze, there is no way you are going to get the car operational; you simply have to be able to do something to keep the coolant from freezing. Unfortunately, the frigid cold air is not enough to keep the engine from overheating and, again, this causes a ton of problems.

The best solution to the frozen coolant problem is to make sure you change the radiator fluid before freezing temperatures approach and to wait until the engine is thawed out to try to drive the vehicle.

What about electric vehicles?

Electric batteries are also less efficient in cold weather. However, new technology has made EVs better at dealing with extreme temperatures. The biggest advantage that an EV has over cars with internal combustion engines is that the electric battery can be heated up using internal heating pads. This isn't really a feasible solution for ICEs, although some such heating mechanisms to exist for drivers in climates that are consistently extremely cold.

In short, your electric car is probably still going to experience some difficulty driving in cold weather just as an ICE vehicle would, but because it doesn't require a radiator to cool the engine down, you're less likely to stall out and have to thaw the engine. Electric vehicles should operate with similar efficiency even in extremely low temperatures.

Via: Business Insider, It Still Runs, The Car Connection, Union of Concerned Scientists