There is a storm brewing on Neptune and it makes for some very pretty images.

The Hubble Space Telescope has produced images of the formation of a Great Dark Spot on Neptune. The spot is a storm that forms from areas of high atmospheric pressure.

SEE ALSO: HUBBLE SHOWS JUST HOW STORMY URANUS GETS IN THE SUMMER

The new Hubble images have helped researchers evaluate how often Neptune gets dark spots and how long they last. The research is also important for possibly understanding other exoplanets.

"If you study the exoplanets and you want to understand how they work, you really need to understand our planets first," said Amy Simon, a planetary scientist at NASA's Goddard Space Flight Center in Greenbelt, Maryland and lead author of the new study published today in AGU's journal Geophysical Research Letters.

"We have so little information on Uranus and Neptune."

A mere five years later, the Hubble Space Telescope revealed both the spots had disappeared.

"It was certainly a surprise," Simon said. "We were used to looking at Jupiter's Great Red Spot, which presumably had been there for more than a hundred years."

Then in 2018, a Great Dark Spot appeared on Neptune nearly the same as the one Voyager saw in 1989. Scientists speculate the spot's high-altitude clouds are made up of methane ice crystals which give the area its white color. 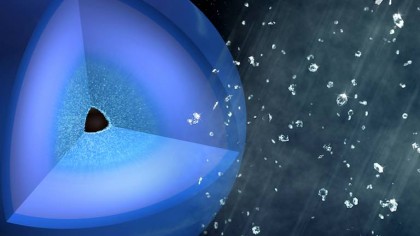 Simon and her team tracked the methane clouds from 2016 to 2018 and discovered the clouds were brightest in 2016 and 2017 before the new Great Dark Spot became visible.

The researchers also used images from Hubble and Voyager 2 to identify how long these storms last and how often they occur. They estimate that new storms occur on Neptune every four to six years and can last up to six years

Now, the team is hoping to analyze next changes in the shape of the vortex and wind speeds in the storms that form the dark spots.

"We have never directly measured winds within Neptune's dark vortices, but we estimate the wind speeds are in the ballpark of 328 feet (100 meters) per second, quite similar to wind speeds within Jupiter's Great Red Spot," said study co-author Michael Wong.

The study is published in the Astronomical Journal.