These high-resolution detailed pictures were taken when Saturn and Mars got the closest they could to Earth this year.

In June and July 2018, Saturn and Mars got the closest they could to Earth this year, in opposition, and lucky for us the NASA/ESA Hubble Space Telescope was there to capture high-resolution impressively clear images of both the exoplanets.

The result is pictures with detail and quality so magnificent they resemble illustrations.

A planet can be said to be in opposition to Earth if its orbit is at a point where the celestial body lines up with the Sun and the Earth, with the latter sitting in between the Sun and the outer planet. This unique position sees the exoplanet witnessed as fully lit by the Sun from Earth's perspective.

Saturn & Mars teamed up to make their closest approaches to Earth & @NASAHubble had its sights on both planets to capture their close-up. On Mars, a dust storm erupted & is currently enshrouding the entire planet, which can be seen in the pic. Take a look: https://t.co/skDaS7sbCI pic.twitter.com/qG1nCiJzRC

It is also the time when the planet is closest to Earth and therefore very much more visible than usual. Saturn reached that spot on 27 June and Mars followed on 27 July.

Hubble was also able to produce detailed images of Saturn’s ring system, famous for being the largest of all the gas giants, near its maximum tilt toward Earth. The images taken on 6 June reveal even the gaps between the planet's impressive rings.

In the last months the planets #Mars and #Saturn have each been in opposition to Earth — Saturn on 27 June and Mars on 27 July. @HUBBLE_space has taken advantage of their proximity to take some new family photos...

Hubble’s pictures also indicate weather patterns on the planet such as a powerful wind around the north pole with bright clouds to the south resulting from a dying storm. Six of Saturn’s 62 moons were also visible.

Meanwhile, Mars' Hubble portraits are from the planet's closest approach to Earth since 2003. Also revealing weather patterns, this picture featured a giant raging sandstorm that covered the red planet with its dust. 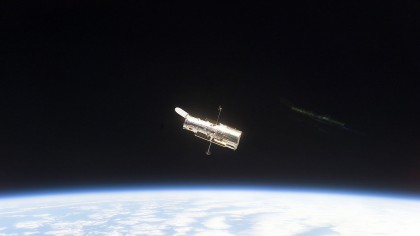 Hubble is world-reknown for its high-resolution celestial images that can only be surpassed by images from visiting spacecrafts. The telescope is an international cooperation between NASA and ESA and is managed by NASA’s Goddard Space Flight Center in Greenbelt, Maryland.

The telescope's awe-inspiring images, however, are not just for show! Scientists use them along with other telescope and space data to study the evolution of weather patterns and large-scale structures on our planetary neighbors.