The annual birthday photo from the Hubble Space Telescope is another beauty.

The Hubble Space Telescope is celebrating its 29th birthday, and to mark the occasion it took this breathtaking shot of the crab nebula. The NASA/ESA Hubble space telescope was launched on 24 April 1990.  It has captured images of the universe that have not only provided valuable material for scientific research but opened up space to the general public.

RELATED: THE MAN WHO DEMYSTIFIED THE UNIVERSE: EDWIN HUBBLE

The Hubble Space Telescope has provided some of the most iconic images of our universe that resonate for both their scientific and aesthetic value. The telescope celebrates its birthday every year with a beautiful image that aims to inspire and excite. For its 29th birthday, the Hubble turned its attention to the southern crab nebula.

This image of the Southern Crab Nebula was taken to celebrate Hubble's 29th anniversary since its launch on April 24, 1990. It shows the results of two stellar companions in a gravitational waltz, several thousand light-years from Earth: https://t.co/T0EnIkXUo6 pic.twitter.com/uUiV8IMip9

The unusual hourglass formation is created by the interaction between a pair of stars at its center. The unusual pairing is made of a red giant and a white dwarf. The red giant star is stripping it's outer layers off before it enters the final stage of its life as a white dwarf. Some of its shedding material is pulled towards its companion stars gravity.

When enough of this material is absorbed by the white dwarf it is ejected outwards in an eruption. At some point, the red giant will complete it's shedding and the process will change. Before this occurs though there are likely to be more eruptions that may result in other more intricate structures.

Astronomers assumed for some time that the nebula was an ordinary star. In 1989, though, it was observed by telescopes at the European Southern Observatory's La Silla Observatory. These images revealed a crab-shaped nebula formed of gas and dust. However, it wasn't until Hubble observed the Southern Crab in 1998 that the full formation could be seen. These images allowed scientists to understand the nested formation of the stars. 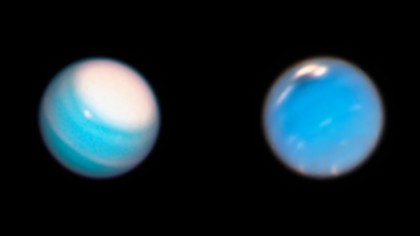 Hubble Shows Just How Stormy Uranus Gets in The Summer

From the images provided by the Hubble telescope astronomers can estimate that the astrological activity that gave the nebula it's unusual shape occurred twice in the recent astrobiological past. The southern crab nebula is not to be confused with the crab nebula that is present in the constellation of Taurus. Taking another image of the southern crab Nebula seems like the perfect way to celebrate the Hubble telescopes 29th birthday just over twenty years since first capturing the unusual star formation.

The Hubble Space Telescope opens the universe to diverse audiences through a very detailed website that contains podcasts, videos, and images. Fans of the telescope can go through the extensive archive of the images produced by the telescope and learn about its intense research projects.