Bina48, a humanoid robot, delivered a sophisticated and riveting ethics philosophy course to a group of university students.

With the overall level of acceptance of AI-supported technology by the general public as well as local governments increasing in the past few years, developers and researchers have been able to explore new areas of application in the area of robotics more dynamic and unrestricted ways, with the exciting outcomes ranging from teachers and companions for children and the elderly, to Sophia, a robot who has achieve such fame that she was granted honorary citizenship by the government of Saudi Arabia.

Now, scientists are pushing the boundaries even further and looking at how humanoid robots would function in an academic environment. In an experiment carried out at the U.S. Military Academy at West Point involving Bina48 looked at how the female bot would do in delivering a lecture in a real university setting. And the results were better than expected.

As would be expected, one of the biggest hurdles for Bina48--as is the case with many other robots--is how it will be received when entering the space. The truth is that with each humanoid robot, as well as each iteration, the perceptions which people hold about robots are changing dramatically, with each new type of interaction creating the possibility of expanding our notions of what a robot can achieve. In this case, the people involved were the students in the class. 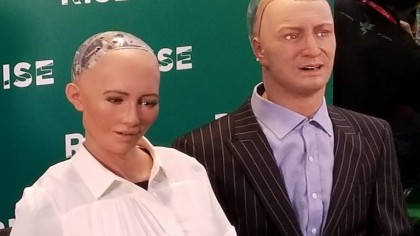 Given the factors involved with this issue, it seemed fitting and appropriate that Bina48 gave an ethics philosophy lecture, not one centered around the scientific disciplines.

In terms of preparing Bina48 for her lecture, she was prepped with information on the topics to be covered for the lecture beforehand by AI developers: they carefully chose the information to ensure that a presentation of generic facts didn't occur.

Most importantly, the bot was able to draw upon this information and answer, out loud, any questions a student had. Thanks to the solid preparation, there was a rather lively interaction in the classroom.

“Before the class, they thought it might be too gimmicky or be entertainment. … They were blown away because she was able to answer questions and reply with nuance. The interesting part was that [the cadets] were taking notes,"  Barry and Maj. Scott Parsons, who, along with 100 students, had the opportunity of observing Bina48 in action, told Axios.

The class resulted in other robots being inspired to teach.

What an inspiration! Maybe I could teach one day too.

Looking ahead to the future of AI in education

As Parsons explains, the goal of the exercise was to effectively whether or not AI "can authentically support teaching in the classroom, where it enhances students’ comprehension and holds interest," with Bina48 surprising everyone involved. Bina48 has been making classroom appearances for some time, although in the past it was for receiving education.

Though few would agree that AI signals the end of the university professor in the classroom, experiments like these do contribute to explaining the many useful and relevant ways in which AI can support our lives. In the end, the focus should be on potential, not replacement, an area that we are slowly shifting to as the collective evidence supporting AI benefits continues to increase.