Even though the hurricane is now a category 2 hurricane, residents of certain east coast US states are being advised to evacuate and be extremely cautious during the storm.

In the latest information from the National Hurricane Center, Hurricane Florence has been downgraded to a Category 2 event. However, that doesn't make the natural disaster any less terrifying for residents of states on the eastern coast.

The National Hurricane Center still expects the hurricane to cause "life threatening, catastrophic flash flooding" whenever it makes landfall.

Here are the 5 AM EDT Key Messages for Hurricane #Florence. Follow the latest at https://t.co/tW4KeGdBFb pic.twitter.com/OvRerjNnQa 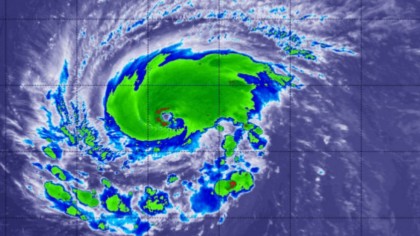 For anyone hoping that Hurricane Florence will be the only major hurricane of the season, residents of the east coast won't be so lucky. There are currently two more tropical storms in the Atlantic -- Joyce and Isaac -- and a category 1 hurricane named Helen.

Subtropical Storm Joyce Forms in Central Atlantic, Watching Gulf System
Far from land and in the north central Atlantic a new subtropical storm has formed. It's in the company of ... https://t.co/K2S7KVSMbV pic.twitter.com/F2tqSpZB3H

ESRI created a tracker to estimate just how many people would be affected by the storm's path given key demographic data from the area inside the error cone.

"The Cone of Uncertainty...represents the probable track of the center of a tropical cyclone, and is formed by enclosing the area swept out by a set of circles along the forecast track (at 12, 24, 36 hours, etc)," the ESRI team explained. "It is important to note that the area affected by a tropical cyclone can extend well beyond the confines of the cone enclosing the most likely track area of the center.”

Laughing in the face of danger

A considerable portion of east coast residents are preparing for or evacuating from the category 2 hurricane to make landfall. But even in the face of that danger, the internet is still managing to find a bit of humor.

me when i see funny hurricane florence memes pic.twitter.com/SF3b5rg5AG

When put in a position of danger, a lot of people are still finding comfort in just laughing it off.

me: lives in the highest risk area for hurricane florence, is ordered mandatory evacuation
also me: hasn't left yet, vehemently sharing florence memes

There are plenty of memes about the situation as well. One of the most frequent to appear are "PIVOT" memes from the sitcom Friends.

Everyone I know in Virginia just keeps posting memes instead of preparing ? and every single meme cracks me up. Lord, we’re all gonna die while making memes about it? #HurricaneFlorence pic.twitter.com/M4064ANda5

There are also parody Facebook groups jokingly encouraging people to stand outside their houses at designated times and yell things to get the hurricane to stop.