The world's second largest radio telescope luckily avoided serious damage after being hit by Hurricane Maria as it swept across Puerto Rico last week. The dish is partially run by the US funded Universities Space Research Association.

The world's second-largest radio telescope narrowly avoided total destruction when Hurricane Maria hit part of Puerto Rico last week. The category 4 storm cut electricity and communication to large swathes of the country including the Arecibo Observatory. The huge facility run by the US was initially thought to have been destroyed by the savage storm that left thousands without homes but recent reports from the station indicate the damage was surprisingly minor.

Nicholas White, a senior vice president at the Universities Space Research Association, which helps run the observatory, said, "There was some damage to it, but not a lot. So far, the only damage that's confirmed is that one of the line feeds on the antenna for one of the radar systems was lost." Staff that manage the radio dish sheltered inside as the storm raged above them. The team posted a radiant Facebook post on Sunday announcing their safety. Members of the research team can be seen holding a Puerto Rican flag while they stand in front of the huge dish.

The Arecibo dish was built in 1963 and has been an integral part of several world-changing scientific discoveries. It was used to find the first planets around other stars and to capture the first image of an asteroid. The dish was also the location from where the famous Arecibo Message was sent from. The message was beamed into outer space in order to describe earth and humanity to any sharp-eared extraterrestrial beings. If an answer is given it is expected to reach earth in approximately 50,000 years.

The radio dish also has a solid place in film pop history. It was used a backdrop for the James Bond film GoldenEye(1995) and the 1997 movie Contact, starring Jodie Foster.

Even before the storm damage, the old facility was in need of costly repairs and maintenance. It is not a high priority for federal science funding and it is unclear whether the money will be provided to complete the additional repairs necessary after the hurricane. 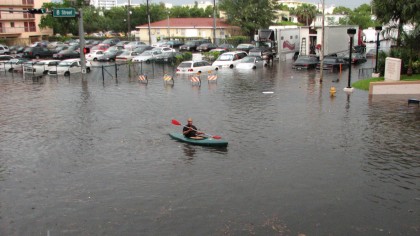 Hurricane Maria has created ‘apocalyptic’ condition in Puerto Rico. It brought with it ravaging storms, huge amounts of rainfall that caused widespread flooding. In some areas, the extensive damage left more than 60% of the village population without shelter. CNN meteorologist described the storm saying, “It is as if Puerto Rico got hit with the strength of Irma's winds, leaving a trail of devastation worse than much of the destruction Irma left in Florida. The rainfall in some areas of Puerto Rico rival the amounts of rain left by Harvey in Houston.”

The US government has responded to the crisis by sending airplanes and ships carrying meals, water and power generators. It is reported that more than 10,000 federal employees have been deployed to Puerto Rico and the US Virgin Islands as part of the cleanup and rebuilding efforts.