Just when you thought the 21st century couldn’t get any weirder, Hyundai went ahead and designed a vehicle that walks instead of drives.

Just when you thought technological development couldn’t get any weirder, the simple car wheel is apparently getting outdated. According to Hyundai’s new concept car that is.

At CES 2019 in Las Vegas, the automaker unveiled details on a new vehicle that’s more insect than it is traditional automobile. It has legs that allow the vehicle to go anywhere without roads, travel over intense rugged terrain, walk across Rivers, and even climb stairs.

The company is calling this new vehicle concept “Elevate,” or the Ultimate Mobility Vehicle, and it’s certainly a sight to see. With all this said, the company certainly isn’t claiming that this new vehicle is perfect for your daily commuter. Rather, they’re proposing this design as the perfect vehicle to have in first responders arsenal of tools.

Supporting this claim is that the company has made the vehicle modular and customizable, giving it the ability to attach specialized platforms for each response application.

One particularly unusual use-case Hyundai showcased for the vehicle is that of a Taxi. Photos show the vehicle climbing stairs and giving those in wheelchairs easy access. It might be a case of over-engineering for the time being, but it is after all just a concept.

Diving into the layout of the vehicle a little closer, in place of four wheels, the vehicle has robot legs, each with 5 degrees of freedom.

The vehicle also rides the green wave by being completely electric. In fact, it’s hub-mounted electric motors are quite similar to the Mars Curiosity Rover’s design.

There is some semblance of normalcy and functionality left in this strange concept vehicle thought, it has a strange form of wheels that allow it to transform into a road-faring vehicle. Through a little transformers action that again is just a concept, the vehicle could shift from walking into having 4 wheels capable of propelling it at highway speeds.

One advantage Hyundai proposed to this functionality is that if your car got stuck in a ditch, it could simply stand up and walk back to the road. What year is it?

CES has become known as a place where tech companies can impress with often unreachable concept dreams – and concept is the prime focus as we consider this announcement from Hyundai.

The company has little to prove that this tech would even work in the proposed application and there was no sign of a prototype. 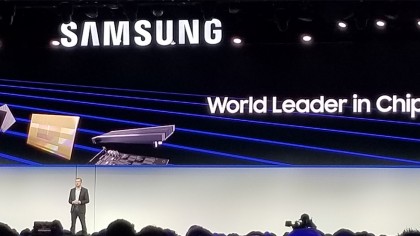 Rather than being a roadmap for Hyundai’s vehicle design, this concept will likely serve as inspiration and guidance on what might be coming down the line.

Sometimes dreaming up something absolutely outlandish and stepping back that design into reality is the best way to innovate.