The 350m thick floating ice shelf on the eastern side of the Antarctic Peninsula experiences a crack and it's lengthening day by day. The crack is more than 100 mile long (approx. 160.9 km) and it grew another 6 miles (approx. 9.6 km) over two weeks this month, British scientists reported on Thursday. 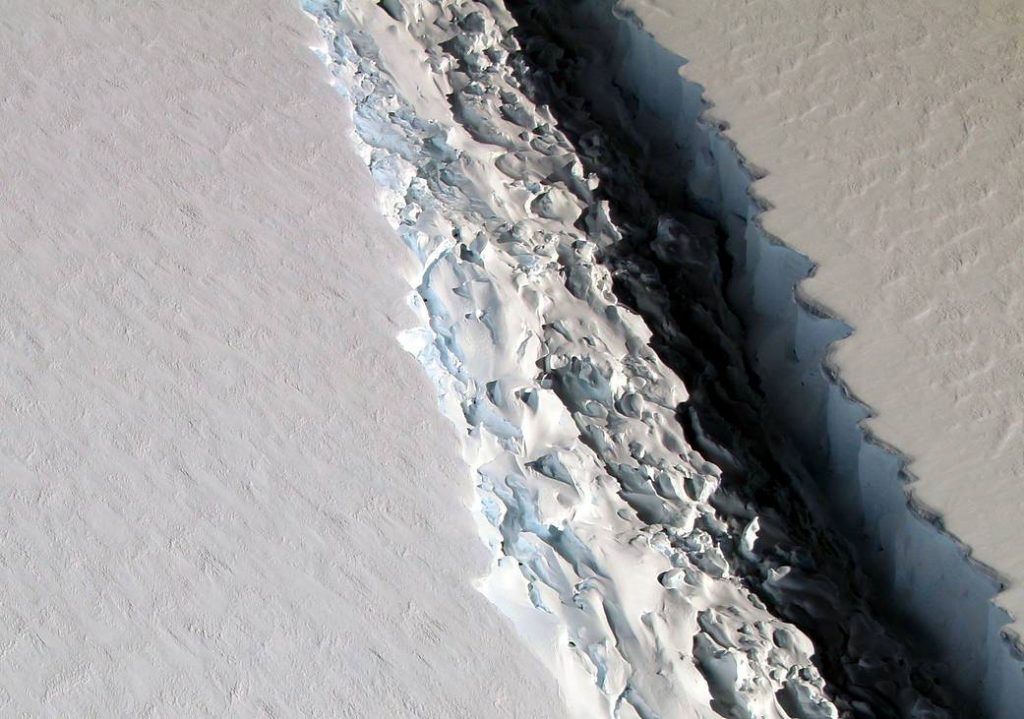 An iceberg larger than 5,000 sq. km is possible to break off

Most importantly, if the Larsen ice crack continues to open up, it might cause a giant iceberg to drift apart from the landmass. Starting from January 1, 2017, the rift in the Larsen C Ice Shelf has grown a further 10 km. If the crevasse continues for 20 more km (approx. 12.42 miles), a berg of a one-quarter size of Wales would be produced.

The UK-based Antarctic research project MIDAS is investigating the effects of the warming climate on the Larsen C ice shelf. Project MIDAS is based at Swansea University and Aberystwyth University in Wales. In addition, it is supported by the British Antarctic Survey and a variety of partners both in the UK and internationally. National Environment Research Council provides funds for the project.

According to researchers at Swansea and Aberystwyth universities, and the British Antarctic Survey, if the mass separates form the Larsen C ice shelf it would be one of the biggest icebergs ever recorded. The report indicates a further extension of the rift, which might calve an iceberg measuring more than 5,000 sq. km (approx. 3106.8 miles) in the area of the Larsen C Ice Shelf.

The parting can change the landscape of the Antarctic Peninsula

The news is obtained from the ESA’s Sentinel-1 satellite system which continuously monitors Larsen C with two spacecraft. As the radar sensors see through cloud, Larsen C is monitored irrespective of the weather conditions.

On January 19, 2017, Aa image taken from the satellites showed a further 10 km of rift growth since January 1st. This brings it to a total length of 175 km (approx. 108.7 miles). As the rift, has progressed to grow parallel to the shelf edge, the iceberg remains attached by around 20 km of ice.

According to the report, when it calves, the Larsen C Ice Shelf will lose more than 10% of its area. This will leave the ice front at its most retreated position ever recorded. Thereby the landscape of the Antarctic Peninsula might change. 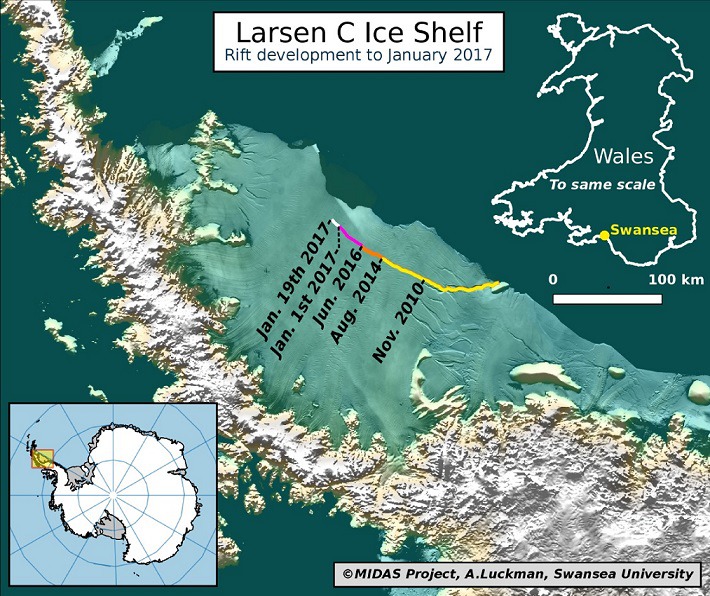 The current location of the rift on Larsen C, as of January 19, 2017. [Image Source: Project MIDAS]

The researchers fear that the break could speed up the flow of the ice towards the sea and destabilize the shelf. This might hold back enough ice to raise the sea level by 4 inches. However, not every scientist necessarily agrees that this might be the possible outcome.

"The fissure tip has just entered a new area of softer ice, which will slow its progress," says Adrian Luckman, Professor at Swansea, to BBC News. "Although you might expect any extension to speed up the point of calving, it actually remains impossible to anticipate when it will break because the fracture process is so complex. My feeling is thought this new development suggests something will happen within weeks to months, there is an outside chance that further growth will be slow for longer than that. Sometimes fissure growth is triggered by ocean swell originating elsewhere, which is also hard to predict." 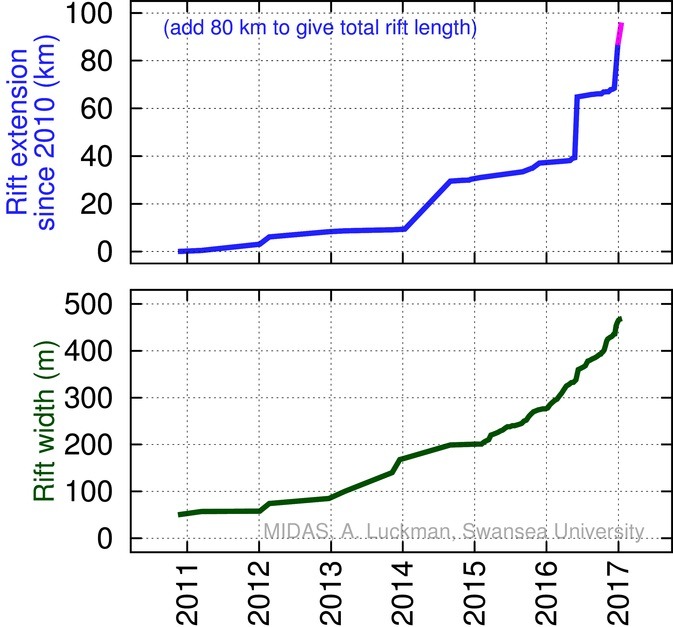 The development of the rift length and width, up to January 19, 2017 [Image Source: Project MIDAS]

Earlier in 2002, the Larsen B Ice Shelf, further to the north, shattered resulting in a similar large calving event. Usually, the floating ice shelves act as a buttress to glaciers flowing off the land. In the case of Larsen B, the floating ice shelf raised the sea level. If Larsen C moves the same way, it would continue a trend across the Antarctic Peninsula.

"Sea ice in the region circulates clockwise with the Weddell Gyre, rather than resting in one place, and icebergs can be carried with this, sometimes out into the Southern Ocean," explains Professor Luckman to BBC.  "It all rather depends on how soon the iceberg breakdown, and how the iceberg draft compares with ocean depths. Ocean depths are not absolutely known in the region precisely because the near continuous ice cover makes ship operations difficult."

Hence the MIDAS Project will continue to monitor the development of the rift. Moreover, they will also assess its ongoing impact on the ice shelf.

SEE ALSO: Earth Sets Record Temperature for the Third Year in a Row