If you're one of those "Mr.Robot" kind of creature with a heavy presence in the coding realm or just simply interested in what's shaking in the world of programming, then you might want to have a browse through this list of the top 10 programming languages of 2017. It's been ranked by the Institution of Electrical and Electronics Engineers using 12 metrics from 10 particularly chosen online sources.

Right, let's get down to business. Soaring up at the top of the programming table, Python takes the lead for being the highly sought-after coding skill by recruiting companies. However, C, Java, and C++ are also of high demand and are in close competition with Python.

In last year's rankings, C# was replaced by R in the top 5 table but has managed to resurrect itself back up at the number 5 position. Making it to this year's top 10, Apple's Swift has impressively pulled up its tier considering that it only debuted on the rankings a couple of years ago.

IEEE's programming language rankings have not seen any new entries for two consecutive years now. "We seem to have entered a period of consolidation in coding as programmers digest the tools created to cater to the explosion of cloud, mobile, and big data applications", stated the Institution in their recent report. 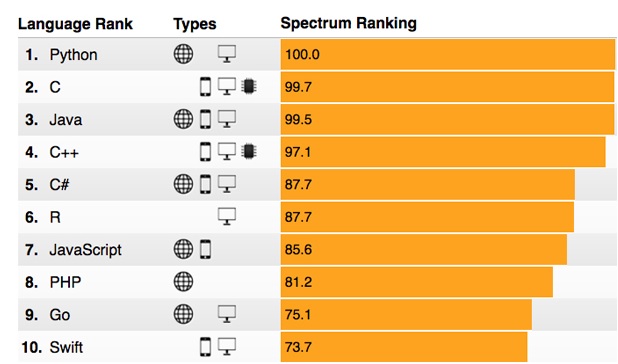 Programming languages that have been around for decades now such as Fortran, Lisp, and Cobol are still standing the test of time. Despite the emergence of new and more sophisticated languages, they continue to belong in the global ranking of popular coding tools. Hardcore programmers may consider HTML as simply a markup rather than a programming language, but IEEE's Spectrum feels it's necessary to include it in the ranking as it is, after all, used by programmers to achieve certain web page effects. Spectrum said, "we have a very pragmatic view about what is and isn’t a recognizable programming language. HTML is used by coders to instruct computers to do things, so we include it".

You can browse through the comprehensive top 48 programming languages, and even formulate your own ranking table, by clicking here.

How programming languages are ranked

A data journalist from IEEE Spectrum amalgamated 12 metrics from 10 different sources in order to compose the programming language ranking table. Open-source code production, social forums, and job postings were amongst the source contexts that were scoured through to gauge the popularity of the programming languages. Some online social platforms such as Twitter, Reddit, Google Trend, and Stack Overflow were also helpful in determining the most utilized languages. A list of more than 300 programming languages from GitHub was reduced down to the most relevant ones by filtering out those that receive a low number of searches. The reduced list was then filtered again based on their usability via the web, mobile, enterprise/desktop, or embedded environments to obtain the most interesting set of languages. As a result, Spectrum's top 48 list of programming languages include names that are relatively known to most computer users.

To find out more about IEEE Spectrum's ranking procedure, you can check out their detailed category breakdown here.