If you aren't already using technology to optimize, organize and, hopefully, minimize your IKEA shopping trips, you are definitely missing out. The app IKEA Catalog lets you peruse the brand's latest lavishly styled catalog before leaving home—and is your best defense against losing yourself later in those expertly styled showrooms. Next, you can make your in-store shopping experience as pain-free as possible with IKEA Store, which enables you to make lists, scan item barcodes and QR codes and navigate the labyrinthine floorplan of your local megastore like a pro.

Finally, click-and-ship service via the brand's 49 country-specific websites allows you to order many—sadly, not all—of your favorite, cryptically-named IKEA products from the comfort of your own couch. But how we ever managed that last feat prior to the release of the IKEA Place this past September is the real mystery.

With Place, you can virtually position thousands of IKEA furnishings into your home. The app boasts near-perfect acuity in terms of room dimensions, so Place also makes it easy to visualize how pieces will fit into your existing decor—and through your door. This is not the first app to meld interior design with augmented reality—designers have been utilizing products like this one to help with the materials and furnishings specification process for a while—but it is likely the first consumer-facing product of its kind associated with such a massive brand.

"The app scales products with 98% accuracy, and shoppers can move them virtually around a room," reported Business Insider. More than 2,000 products will be available in AR on the launch date, and the selection will be primarily focused on larger furniture, such as sofas, armchairs, and coffee tables."

We anticipate Place being especially useful for people living in big cities, where space is at a premium and transporting ill-fitting furniture back to the store can be a serious hassle.

“IKEA Place makes it easier than ever before to make buying decisions in your own space, to get inspiration and try out many different products, styles and colours in real-life settings – all with a swipe of a finger," said Michael Valdsgaard, Leader Digital Transformation at Inter IKEA Systems in a press release.

“It is our mission to create a better everyday life for everyone, everywhere and now that technology has caught up with our ambition, through AR, we will redefine the customer experience in the furniture retail space once more."

Place is IKEA's most recent foray into applying emerging technologies to retail, but it is certainly not their only one. The Swedish company—which took in over 38bn euro in 2017 alone—has a track record of adopting disruptive technology early on, and then harnessing it to improve customers' brand experience. In 2014, for example, savvy shoppers could combine product pics from the IKEA catalog with their own photos to get a sense of how selected items from that year's collection would mesh with they already had in their homes. This built on the previous year's interactive catalog, which featured hidden images that could be unlocked via smartphone.

Place was created using ARKit, a framework for developers that runs on Apple's recently released iOS11 operating system. While a lot of attention is being given to the happy marriage of ARKit and iPhoneX, until you get your hands on one—even if you pre-ordered the phone won't be in your hands until at least November 2017, says CNET—you can experiment with the kit on any iPhone or iPad that is running iOS11 and powered by an A9, A10 or A11 chip processors. You can find a list of compatible devices here.

AR or "augmented reality" once a term more likely to be used by sci-fi aficionados and tech industry reps, is now a household expression due to the phenomenon of Pokemon Go. While Google Glass faded from memory, the AR-based game hit a staggering 750 million downloads and nearly $1bn in revenue for its parent company, Niantic since its July 2016 launch, Venture Beat reported last June. 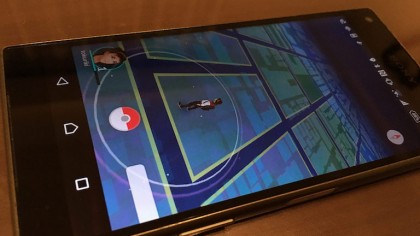 Here's Why The World Exploded from Pokémon Go

"[I]t seems that Pokemon Go will go down in history as the game that truly brought AR to the public at large," Kevin Anderton recently wrote for Forbes.

"If you are not one of the millions of fans that are out there playing this game, all you need to understand is that the players are required to interact with reality in order to play.... This is the core practice of Augmented Reality. It is technology that interacts directly with real world environments and supplements them with new content. Pokemon Go accomplishes this by making millions of people run around outside looking for cute little monsters that they can only see through their phone or tablet."

The reality of augmented shopping

But it's not just fun and games. Industry insiders are predicting that AR is poised to entirely disrupt the retail sector. It has already had a significant impact in related industries such as the architecture and design space.

"Augmented reality and virtual reality will be a total game changer for retail in the same way as the internet. Only this time, much faster,” said Mr. Valdsgaard for IKEA.

And IKEA isn't stopping there. The innovative Swedish company is already anticipating AI integration with the Do You Speak Human? survey, an internet survey being conducted by its Copenhagen-based "external future living lab", Space10.

"For the most part, the questions circle around things like what preference you have for the assistant’s gender (with male, female and gender-neutral as options) and whether you’d like your AI-powered helper to be more humanlike or robotic," said the Next Web in a recent article.

Now if only there was an app that would put their furniture together for you.