An undergraduate student, Alexandr 'Sasha' Trubetskoy, made a modern-looking subway map of the ancient Roman roads network from ca. 125 AD.

An undergraduate student from the University of Chicago, Alexandr 'Sasha' Trubetskoy, created a subway-style diagram of the major Roman roads. He based the modern-looking subway map on the road network of the Roman Empire around the ca. 125 AD period.

The making of the Roman roads map

Trubetskoy is a statistics student originally from Washington DC. As a self-proclaimed geography and data nerd, he spends his free time making maps. Creating the map required serious research according to Trubetskoy. He had to look up the links between cities and by which road they are connected with. A rough schematic was then drafted in order to visualize the network and the location of the cities. To make the map visually pleasing, Trubetskoy had to figure out how to neatly arrange the "stations" (cities) so as not to make it look confusing and difficult to look at. He told Interesting Engineering that a transit map is more about what "station" links to where, rather than "accurately placing the cities geographically".

The software Adobe Illustrator was used to actually draw the map. As a big learning curve for the map creator the design, drawing, and completion process looped around at least three times until he ended up with a finished map that he liked.

The Roman roads subway map was made with accurate names, and in the case where roads didn't have historical names, he had to creatively improvise. Trubetskoy tried to incorporate cities with large populations or included those that were provincial capitals around the 2nd century.

Among his primary sources were the Peutinger Table and the Antonine Itinerary. Other historical information and references came from Stanford ORBIS and Pelagios - the Google Maps of Ancient Rome.

By creating a Roman roads map that involves many countries in Europe and some parts of North Africa, one is opening a wide door for suggestions, comments, and questions. When asked if Ireland could be included in the map, even if there weren't any Roman roads in the country just like Corsica and Cyprus didn't but was included in the diagram, this is what Trubetskoy had to say.

"As much as I love Ireland, I must respectfully decline. Because while Corsica and Cyprus were part of the Empire, Ireland never was, and I have to keep the map as minimal as possible".

When confronted about the precise location of Luguvalium, or present day Carlisle on the border between Scotland and England, to be around 2/3 of the way up from the bottom of the British Isles, Trubetskoy responded some basic tube principles.

"Tube maps are not big on cartographical precision, to begin with, it’s the connections that are most important. That’s why Britain is allowed to be misshapen, among other things".

Trubetskoy also made other cool and visually-rich maps around the world like the Map of Washington State stereotypes, What do Europeans call a Platypus, How big is the Arctic Circle, and many others.

The "How big is the Arctic Circle" map is one worth looking at. It puts into simple perspectives on just how big the Arctic Circle is. Plotted on top of the European map, the vast Circle easily consumes the whole continent. And the same continent consumption is seen when the scaled Circle is placed over the whole of Central America, which also covers a substantial part of Canada. He used a scale of 1:50,000,000 for the European and American maps. An interesting fact about the Arctic Circle, as mentioned by Trubetskoy, is that the diameter of the circle between Sweden and Alaska is considerably shorter compared to viewing its distance on a regular map.

Geographically speaking, continents like Europe and North and Central America are considered as the “western world”. But if you take a closer look at Trubetskoy’s “Western countries” map, you’d realize that there’s much more to the word “western” than just its geographical position on the world map. A few variables were considered such as culture, human development, and political conditions for drawing up this map.

One of the most interesting maps of Trubetskoy is the “Biggest Soviet cities”. The map entails the largest cities of the USSR by population from a 1989 report he dug up. The first map he made was that of the 296 largest Soviet cities. He then made a second map that reveals the cities who have gained and lost population around the fall of the USSR until last year. Trubetskoy went on to discuss the background behind the rise and fall of populations in the Soviet cities that made it on the map. Head over to his website to read more on this topic.

Trubetskoy also tackled the cities in the US that are pronounced on its own or doesn’t mention their corresponding state when said and written out. For example, cities such as San Francisco, Salt Lake City, San Antonio, New Orleans, and Oklahoma City are amongst places in the US that don't have their states attached to their name. As opposed to cities like Jacksonville, Florida, Portland, Oregon, Louisville, Kentucky, and Memphis, Tennessee. One of the reasons, according to Trubetskoy, is that these city names are used for something else. So, to avoid confusion, their corresponding state must be mentioned. Check out his full map revealing all the standalone cities in the US. 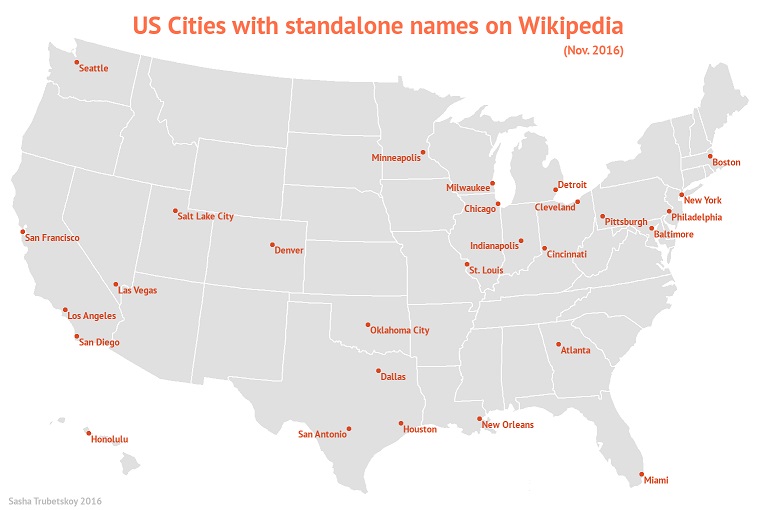 One of his earlier works isn’t really a map but we thought it was interesting. Trubetskoy took a stab at providing a reasoned explanation on why England has the largest population in the British Isles. And why Scotland and Wales have significantly less. He gave out a decent historical and geographical reasoning to this large population gap. But as a local Glaswegian, I think we can provide a more up-to-date reasoning to this. First of all, England is one of Europe’s largest melting pot. Many nations from around the continent and even from the Middle-East, Africa, and Asia have based themselves in and around the English metropolis of London. So, no wonder there is approximately a 47.8 million difference in the population of England and Scotland. The rate of migration within Scotland is also gradually growing with immigrants from Europe and other continents. However, it’s not as rapid as in England. There are also other social reasonings to the large population gap within the UK but we’ll let those socially inclined writers handle that one.

9 GPS navigator systems to guide you through unknown locations