Impossible Colors and How to Train Your Eyes to See Them

While it may be a little tricky, seeing these forbidden colors is actually possible with the eye exercise that’s being widely suggested.

Impossible colors are the ones that your eyes can’t see. But some researchers think that they’ve found a way to see the impossible.

Art without color would lose much of the purpose. But, even an artist with extensive knowledge of hues and color shades will not be in a position to see what is known as “Impossible” or “Forbidden” colors. This is because impossible colors are meant to work in a different way. To understand these interesting colors, let’s dig a bit deeper and first try to understand what color actually is.

Colors Exist Purely in Our Minds

The colors we see are only the reflections of light with different wavelengths. We see colors when the reflected light from an object is detected by millions of color-sensing cells in our retina known as cones. For example, an orange fruit is not inherently orange. When light passes through the orange’s surface, certain wavelengths are absorbed and others are reflected back and sensed by cones. These cones send electrical signals to our brain that process the data into a recognizable color, in this case, orange. 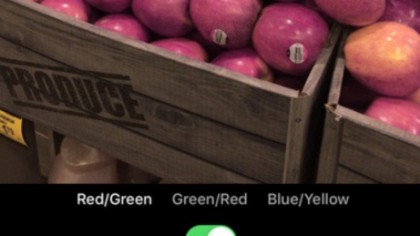 We, humans, have three types of cones for sensing different wavelengths of light, which helps us to recognize millions of colors. This is possible through signal processing cells known as opponent neurons, which process the data received from the cones by combining millions of electrical signals from each of the three cones to recreate the image of the true color.

Residing in the visual cortex of our brain, the two opponent neurons function in a binary way: red-green opponent can signal either red or green, while blue-yellow opponent signal either blue or yellow. These neurons cannot signal both the colors at a time. The neurons won’t let you see blue and yellow at a time nor red and green, the combination of which is known as impossible colors. You might be thinking that yellow and blue can look together as green, or red and green can look brown. But, that is a result of mixing the two colors and not a single pigment that is equally blue and yellow or equally red and green.

The opponent theory is around since the 1970s stating that it is impossible for a human eye to perceive certain colors such as reddish green or bluish yellow. However, in 1980, Hewitt Crane and Thomas Piantanida conducted an experiment that would trick the brain and see these impossible colors. Their experiment involved instructing the subjects to stare at an image made up of two strips – red and green. To ensure that the subject’s eyes remain fixed on the opposing colors, their heads were stabilized with a chin rest and the eye movements were tracked using a camera. The images were adjusted according to the eye movements ensuring that both the eyes received continuous wavelength of light. The results were highly surprising. People staring at the two opposing colors for a long time observed that the border between them would gradually dissolve and a new “forbidden” color would emerge.

However, Crane’s experiment was dismissed as a joke and other vision scientists couldn’t repeat the results. But in 2010, impossible colors got back the attention by visual researchers Vincent Billock and Brian Tsou who identified the reason why other researchers failed to replicate the Crane’s results. They figured out that tricking a brain to see impossible colors is based on two factors – eye tracking and luminance. Tracking the observer’s eye movement and playing with the luminance, Billock and Tsou proved that 6 out of 7 observers were able to see impossible colors.

How to See Impossible Colors?

With such mind-blowing research, you might be curious to know if you can actually train yourself to see impossible colors. While it may be a little tricky, seeing these forbidden colors is actually possible with the eye exercise that’s being widely suggested. To take the test, place the yellow and blue objects right next to each other. Cross your eyes to stack the two pluses on top of each other so that both the objects overlap. What do you see?

The overlapping region will be a mix of two colors (i.e. green), but along with it, you’ll also observe a field of dots of an unfamiliar color, which is actually blue/yellow at once – the impossible color. The same test can be repeated with red and green objects to observe both colors at a time. It might not appear in one go, but this test is worth trying out.

If you cannot see the colors still, try seeing another type of imaginary color known as Chimerical Color. This type of colors can be seen by looking at one color until the cone cells are fatigued and then looking at a different color. All you have to do is focus on one color for 30-60 seconds and then view the afterimage over white, black or complimentary color.

There are many vision researchers however who have criticized the possibility of impossible colors citing that these are just intermediary colors between the two. They believe that impossible colors are called that because of a reason that they are actually impossible to see. The theory about these forbidden colors as such is still under a dispute. But, what we do know is that the observers in experiments did saw colors that they’ve never seen before. Impossible colors may not exist, but what’s possible is that we can certainly trick our brain to see something unfamiliar and appreciate color vision.

Via: ThoughtCo., How Stuff Works