In a potentially game changing development, scientists have shown that cancer-combating T Cells can be created indefinitely in a laboratory.

In a major advance in the fight against cancer, scientists at UCLA show that they are able to generate and develop mature T cells with crucial cancer-fighting receptors from pluripotent stem cells. What’s more, these stem cells need not come from the cancer patient themselves, opening the door to a revolutionary avenue of off-the-shelf immunotherapies for cancer patients that are affordable and effective.

In a recent study, published in the journal Cell Stem Cell, Dr. Gay Crooks, professor of pathology and laboratory medicine and of pediatrics at UCLA, along with co-authors, Amélie Montel-Hagen, associate project scientist in Crook’s lab, and Dr. Christopher Seet, clinical instructor in the division of hematology-oncology at UCLA, show for the first time how pluripotent stem cells could be used to generate stronger, more mature T cells capable of fighting and killing cancer cells.

What makes pluripotent stem cells special is that they are stem cells that can be coaxed into producing any type of cell in the human body. More importantly, in this case, they can also be grown without limit in a laboratory, meaning there is no end to the number of pluripotent stem cells scientists can use to create T cells which offer the possibility of an unlimited supply of T cells for future immunotherapies.

Why T Cells Show Such Promise In Fighting Diseases Like Cancer

T cells are the cells in our body that the immune system uses to battle infections but have also shown promise in eliminating cancer cells. Current T cell therapies usually involve collecting a sample of the patients own T cells, genetically modifying the cells with a receptor that can detect and fight cancer cells like they would an infection, and injecting these cells back into the patient.

The problem is that T cells that have been genetically modified can malfunction and so are not effective cancer-fighting agents. The treatments are also generally very expensive since the treatments are tailored to the individual patient—it must use the patients own T cells—which may not be possible with some cancer patients whose T cell counts are too low.

That makes a treatment that can produce T cells that do not rely on getting them from the patient a huge leap forward in creating affordable and effective treatments that are accessible to more people.

Replicating the Design of the Body in the Lab

Crooks' team are not the first to attempt was not the first to generate T cells from pluripotent stem cells, but previous efforts have had limited success, and none have developed fully mature, functional T cells—even when combined with a layer of supporting cells.

Crooks and her team took a different approach. They used 3D structures called artificial thymic organoids to simulate the body’s thymus, the organ in the body responsible for turning blood stem cells into T cells.

After previously showing that artificial thymic organoids could be used to generate mature T cells from blood stem cells, the team believed that the same could be done using pluripotent stem cells.

“What's exciting is the fact that we start with pluripotent stem cells," says Crooks. "My hope for the future of this technique is that we can combine it with the use of gene editing tools to create 'off-the-shelf' T cell therapies that are more readily available for patients.” 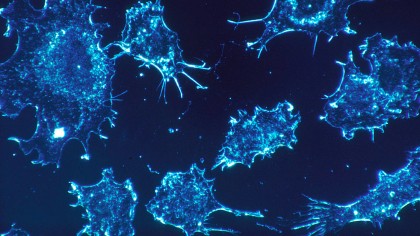 Further, their study showed that they could get these stem cells to express a specific cancer-fighting T cell receptor, giving the T cells they would go on to produce the ability to seek out and destroy tumor cells in mice.

Using genetic engineering techniques, these T cells could even be tailored to fight specific forms of cancer. "Once we create genetically edited pluripotent stem cell lines that can produce tumor-specific T cells in artificial thymic organoids,” Montel-Hagen says, “we can expand those stem cell lines indefinitely."

One of the problems left for the team to overcome is that since the T cells aren’t collected directly from the patients, the T cells produced with the artificial thymic organoids contain additional surface molecules that might themselves trigger immune responses from patients, leading to the T cells being rejected and destroyed by the patient’s body.

“Our next step,” according to Seet, “will be to create T cells that have the receptors to fight cancer but do not have the molecules that cause the rejection of the cells, which would be a major step toward the development of universal T cell therapies.”

While the study focused on cancer cells specifically, Crooks’ team’s ability to generate functioning T cells from the artificial thymic organoid that expressed specific receptors could be a game changer for other diseases beyond cancer.

Since T cells fight bacterial and viral infections as well, the possible applications in treatments for infections like HIV or antibiotic-resistant bacteria are just as promising. Whether they are effective in these other areas remains to be seen, but the outlook is positive.

A T cell is a T cell whether it’s fighting cancer or it’s fighting off the common cold, so future therapies built around the work of Crooks, Montel-Hagen, and Seet hold a lot of promise. And with antibiotic-resistant bacteria on the rise, new treatments for diseases couldn’t come too soon.

Water Vapor Could Be Surprise Source of Renewable Energy

Scientists Have Found the Source for Cosmic Carbon, One of the Main Building Blocks of Life