With hyperloop projects popping up throughout the globe, India wants in on the action. The country signed an agreement with Hyperloop Transportation Technologies to create a system between two of India's largest cities. HTT claims the trip would take as little as six minutes.

By  Shelby Rogers
Sep 07, 2017
Projection of what the HTT system could look like in India Hyperloop Transportation Technologies

Hyperloop projects seem to be popping up more and more frequently as people become intrigued by the promises of high-speed travel. Elon Musk already has one firmly planned for the U.S. with rumors of a second Hyperloop running to New York City. The United Arab Emirates is getting its project courtesy of Rob Lloyd's Hyperloop One running between Abu Dhabi and Dubai. Now, India wants in on the action.

Hyperloop Transportation Technologies announced that it signed a deal with Andhra Pradesh, a state in southeast India. India's leadership hope that building a hyperloop will propel the country and its image as a growing leader in technology.

"In order to boost its image and emerge as the frontier city in future technology, Amaravati is looking forward to collaborating with Hyperloop Transportation Technologies," Krishna Kishore, CEO of the state’s economic development board, said in a statement.

The cost for the project isn't exactly clear in the press release. However, it does mention that a lot of money comes "primarily from private investors."

"HTT’s transportation platform will enrich the IT infrastructure and ecosystem of Andhra Pradesh to a large extent," said Nara Lokesh, Cabinet Minister for Information Technology, Panchayati Raj and Rural Development for the State of Andhra Pradesh. "The Hyperloop will give rise to development of various state-of-the-art technology parks and software clusters in Amaravati, helping to fortify the city’s image as a world class leader in science and technology."

Andhra Pradesh and HTT worked out a memorandum of understanding. This type of agreement lets HTT investigate potential routes. Planners want the hyperloop to run between Vijayawada and Amaravati. The time for the 27-mile journey takes about 70 minutes when you accommodate for traffic. With the hyperloop, HTT claims it can take passengers through that distance in just six minutes.

HTT has yet to demonstrate a functional system to the public yet. However, CEO Dirk Ahlborn remains hopeful and confident.

Technology might not be an issue, but India's reliance and dedication to traditional railways might be. HTT has to compete with pre-existing airlines, train companies, and private car delivery services. The hyperloop will have to be an affordable alternative rather than one purely high tech in order to survive against established travel alternatives.

The India project isn't HTT's only international contract. The company recently made plans to build networks with South Korea and Slovakia.

Just because HTT managed to land this contract doesn't mean its competition is taking a break. Elon Musk and his Hyperloop One crew were the first to test their hyperloop pods. The 28-foot-long cylinder of aluminum and carbon fiber whizzed through the testing area at 192 mph. Just last week, Musk sent the pusher system sans pod through the tunnel and clocked in speeds of 220 mph. 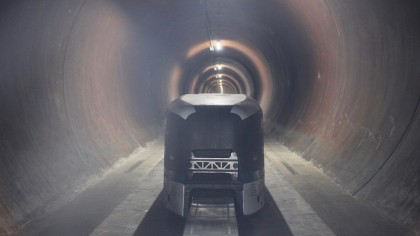 The China Aerospace Science and Industrial Corporation also recently announced its new supersonic 'flying train.' That intercontinental hyperloop train would reach Mach 3 with a top speed of roughly 2,300 miles per hour. That blows Musk's initial plan of 745 mph between Los Angeles and San Francisco away. CASIC also has considerable resources; last year alone, the group raked in $30 billion with a net profit of $1.5 billion. It also employs nearly 150,000 people across China. The T Flight would also work alongside China's pre-existing maglev technology. And China's love of high-speed rails certainly shows how well they know that technology.

Regardless of who gets to the end goal first, the technology once it's finished should be incredibly impressive. At this point, it's a race to see who can do it the best, safest, and most cost efficient.