Aldi Novel Adilang's fishing platform was set adrift after strong winds in July. He was finally rescued by a Panamanian-flagged vessel on 31 August.

An Indonesian teenager has survived 49 days adrift on a floating fishing platform, living off fish and seawater. Aldi Novel Adilang was working as a lamp keeper on the rompong, a floating platform used to catch fish which was anchored to the seabed around 125 kilometers (78 miles) out at sea from North Sulawesi province.

Strong winds on July 14 broke the platform's anchors and pushed Adilang 1,920 kilometers (1,200 miles) to waters near Guam. He survived his ordeal at sea by catching fish and cooking them over small fires made from burning parts of the shelter.

He was finally rescued by a Panamanian-flagged vessel, MV Arpeggio, as he floated in the waters off Guam on 31 August. The Indonesian consulate in Osaka reported that more than 10 boats passed the stranded teen before one finally understood the gravity of the situation.

“Every time he saw a large ship, he said, he was hopeful, but more than 10 ships had sailed past him, none of them stopped or saw Aldi,” Fajar Firdaus, an Indonesian diplomat from the consulate in Osaka, told the Jakarta Post. The rescue was difficult due to heavy waves, the large boat had difficulty getting close enough to Adilang’s platform.

Eventually, the teen decided to jump into the wild water and try and climb a rope to the ship. In his weakened state, he almost lost his grip but was eventually dragged aboard by the crew.

The boy survived by drinking seawater filtered through his clothes to reduce his salt intake. He told press in an interview that he often felt suicidal at times, but found solace in a bible he had onboard.

Adilang had worked as a lamp keep on the rompong for several years. His primary task was to ensure the lamps used to attract the fish were kept lit.

Once a week, a company representative would deliver fuel, food and other supplies. The company reportedly has more than 50 floating platforms across the waters of Manado.

Adilang flew home to his family on September 8 in good health. Fishing is an integral part of the Indonesian economy. 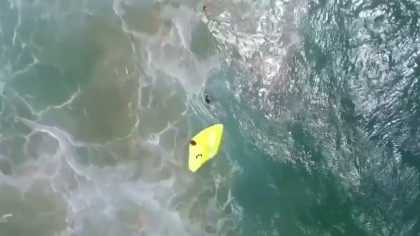 Government figures indicate Indonesia produced 8 million tonnes of fisheries products in 2007. The country is trying to shift away from intensive environmentally damaging fishing practices towards aquaculture and other sustainable fishing practices.

“In 2000 fisheries output was 70% marine capture and 30% aquaculture but seven years later the figures are 63% marine capture and 37% aquaculture. This is good as we are trying to decrease the pressure on marine fisheries,” Saut Hutagalung, of the Directorate General of Fisheries Product Processing and Marketing under the Ministry of Marine Affairs and Fisheries commented.

“In the long term the market is not only concerned with food safety but the environment. We want more aquaculture production but it will take time. We have to start now and then relax on marine fishery."