Parents know that if they want to travel with young children and babies in the car then they need the safety of a child's car seat. Most of the time car seats for children are bulky items that take up a great deal of storage and are often heavy. Another issue is that they are usually hard to get in the right position. This however, could all be about to change thanks to a new inflatable car seat concept from Volvo. 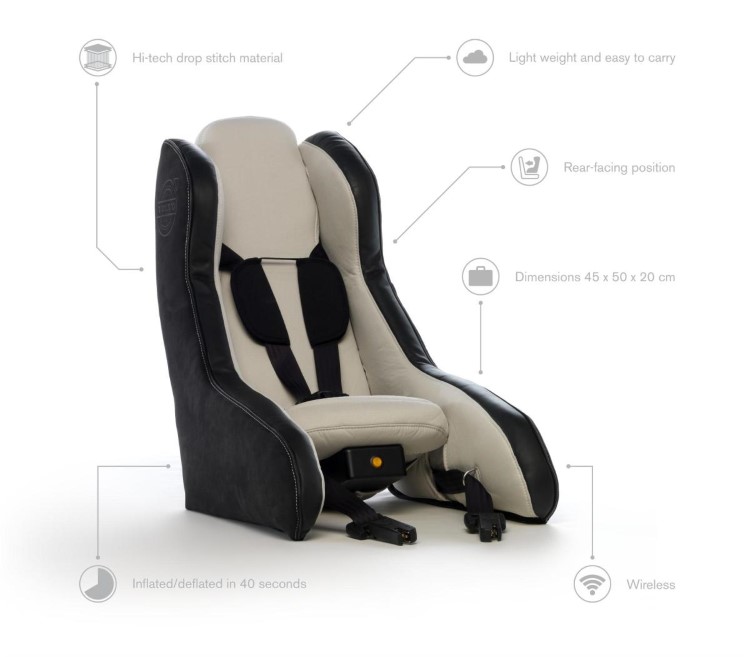 Volvo hit the drawing board to try and make life easier for drivers with children and they came up with an idea that was lightweight and which could be inflated in position and then deflated and returned to a bag for storage. The design is still at concept stage but it could see production soon.

The car maker said that the seat comes with a pump built into it, which would allow anyone with children to inflate the car seat in just 40 seconds. The seat can also be inflated via remote control as it offers wireless connectivity. When the car seat is deflated it measures 18 x 20 x 8 inches and has a weight of 11 pounds. This means that the car seat could have gone from a bulky item to one that would fit into a large bag.

Volvo has experimented with inflatable car seats before but this is the first time that they have looked into an inflatable child rear facing car seat. There are others on the market, however these are booster seats. Booster seats are different as they are used by older children and they use the seat belts in the car.

The rear facing concept car seat of Volvo has a five point harness, meaning that Volvo have designed the seat to be suitable for children up to the age of three years. Volvo has used the drop-stitch fabric which has been used to make inflatable boats. The design of the car seat is attractive and no one could say that it wouldn’t fit in with the leather seating offered in Volvo cars. At the moment Volvo hasn’t mentioned if they are planning to take the car seat into production, nor have they offered any more details about the seat. One thing that Volvo has shown with the inflatable car seat concept is that car seats don’t have to be bulky.

Along with the car seat being suitable for the owner’s car, it would also come in very handy when renting a car on holiday, in taxis and as it can be easily stored it could be taken in carry-on luggage when flying