Mike Holdsworth discusses the importance of IoT in the transport and logistics space, the environmental benefits and Inmarsat's future goals to remain at the forefront in meeting the evolving IoT requirements.

Setup in 1979 by the International Maritime Organization (IMO), Inmarsat began delivering sat-com solutions first for ships to stay in touch with the shore, no matter how far out to sea. Today, the company has a fleet of 13 satellites and is a market leader in mobile satellite communications with customers spread all over the globe.

Apart from sectors like Aviation, Oil & Gas, Mining, Construction and Broadcast Media, the global mobile satellite company also enables businesses in the Transport & Logistics sector to enhance their operational efficiency. The company essentially helps organizations to capture full value from the Internet of Things (IoT), by offering end-to-end solutions for transport through their ubiquitous satellite network.

At IE, we got an opportunity to discuss in detail about the company’s vision and the future of IoT in the Transport & Logistics sector with Mike Holdsworth.

Mike is the Director of Transport at Inmarsat and is responsible for enabling businesses to realize the full potential of IoT. He makes sure that Inmarsat remains at the forefront in meeting the evolving requirements in the IoT space.

Mike also provided us information on their latest research on how IoT will play a pivotal role in enabling the transport and logistics sector to reduce its carbon footprint and minimize any negative impact on the environment.

Here’s what we discussed:

Kashyap Vyas (KV): Why is IoT so important? What is the scene like today? Why is everyone behind IoT?

Mike Holdsworth (MH): You need to split it out. You've got the Industrial IoT, which is important for companies to operate efficiently, meet regulatory requirements and save money. And, then there's the element of IoT where you're looking at in people's homes.

Generally, you've only got so many hours and your IOT is important because it allows anyone to be more efficient if you deploy it. So, not only the companies but also people as well.

Data is becoming more important all the time. Smart devices are around the planet and IOT could be in anything. The food in your fridge could be smart or you put a chip or a little tracking device on to your primary school child's bag so that you know where they are all the time.

It's getting to be everywhere.

KV: What specific problem was Inmarsat trying to solve with this research?

MH: At Inmarsat, we wanted to understand where companies were in their IOT journey, and there's a reason for this. We've been quite heavily involved in IOT for a number of years.

And what we've seen is that the information that's in fact about what people are doing doesn't seem to bear any resemblance to the reality of what's actually going on in the real world. Until we were slightly concerned that if everyone is talking about how amazing IOT is, and now they're all doing great things, but no one is actually doing them (sic).

Because we wanted to validate some of the information that we've had from talking with different entities.

KV: In your research, you mentioned that 90 to 95 percent of companies prefer IOT, so what was the dataset that you used for the research?

MH: So, basically what we did was we have a market research specialist Vanson Bourne. They in effect interviewed different people in the Transport & Logistics sector.

They've interviewed 100 global transport and logistics businesses with at least 1000 employees. We are looking at their projections of IOT within their organization.

Overall, a number of different sectors were picked. About 500 people were interviewed across different types of companies. A widespread global dataset was utilized.

KV: The research pointed to the environmental benefits of reductions in CO2 emissions. Could you shed some light on that?

MH: There's a couple of different ways that can appear. Fuel management has been a specific thing in the transport sector for some time.

The other one is that you can control the engine performance. So, one of our members just won a European Space Agency award recently for fuel efficiency and fuel management in the transport sector.

Until he was looking at was a way of controlling the engine, so that you don't over rev it and actually worked at an optimum pace all the time. That in effect reduces fuel usage (sic).

If you went to a large logistics company like the DHL, FedEx or in the UK smaller Eddie Stobart and said this system can save one percent of your fuel. That fuel goals are in the multi-millions of dollars (sic).

So then it’s cost saving and meeting an obligation in environmental responsibility by reducing CO2.

KV: So, if you really look forward to implementing IOT in transportation and logistics sector, what are the existing challenges that you find in this industry?

MH: I think cost is a big challenge. Typically, the fleets are quite large and they don't like the idea of spending a great deal of money on equipment that there could be for each of their vehicles. We are actively supporting these type of fleets, but they are very cost driven.

Challenges along the side of things like integrating across large fleets is a challenge. Some of the systems that we do have are purely magnetic, and they just attach to the roof of the vehicle and then makes it a lot easier to roll-out in volume than something which it has to integrate probably into the engine modules.

Challenges are integration. Challenge is really understanding the benefit of what you’re actually doing.

One example would be when we designed a system in South America and it was mainly for tracking, and they realized that they could have different sensors onto the system. So the fleet manager was able to look at the performances of vehicles.

He could work out which engines were being driven in a fashion that meant they may require more maintenance, and so was able to talk to the drivers and tell them that maybe they want to slow down a little bit. So there's a knock-on effect of having data.

The biggest challenge probably in transport and logistics is they've (businesses) been capturing data for years on vehicles, but then maybe not doing anything with it. So, the biggest challenge is how do they visualize probably the data that they've already got, and how do they build something moving forward that allows them to get operational benefits from the data that they've already got.

KV: Where does Inmarsat see the opportunity in this industry? Where do you position yourself in this?

MH: I am at the coalface, where I'm talking to the end users and the third-party logistics companies and global supply chain companies also. What we're seeing is where we can engage IoT with industries; the heavy users of transport and logistics. We can actually open up discussions about how we can enable certain outcomes to those industries.

One example would be pharmaceuticals or petrochemicals. They have particular nuances around transport. They require moving blood, moving body parts around the health systems, it has specific requirements. I think this is where we see a lot of value adding.

This is like a good challenge and our clients, some of them alongside our partners in these specific industries. That's where we've seen a lot of interest.

And, we're also seeing companies that have got large logistics contracts coming to us for advice on how do they might utilize connectivity throughout a journey. So, what we do then, is we talk with our maritime colleagues and aviation colleagues, and we're trying to create what we call a globally connected logistics system.

So assets can move around the world and you'd have visibility often at different points in the supply chain.

KV: In a span of three-four years from now where do you see Inmarsat in the transport and logistics industry?

MH: I think what we'll have in over the next couple of years where we're working with technology partners to create some quite disruptive technology down at the central level. We're also working with new partners to look at different ways of visualizing data in the transport and logistics sector.

What will probably happen is we'll become a trusted partner to some key global players where we'll be focusing on very specific contracts that they've got straightforward in the global supply chain. 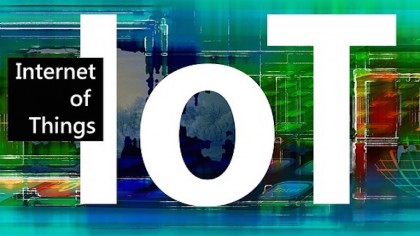 How to Introduce the Internet of Things to Your Manufacturing Plant

So, we're not planning on boiling the ocean, but we'll be really good at making a cup of tea. We'll get really focused on supporting some big projects, and we'll get heavily involved for anything from print and electronic right through to sort of visualizing the data at the other end.

That's what we're planning on doing, and we're actively involved in it now. But we're not maybe promoting it quite as much as we could, because we're too busy actually supporting the projects that we're doing there.

You'll see Inmarsat go from a satellite company to a solutions company in logistics over the next couple of years by actively supporting large global connected logistics operations.

KV: There's a huge amount of data between satellite and the IOT device, so how do you manage the data security part?

MH: There are a number of different ways. What we're finding is that there’s the opportunity to apply things like Blockchain in the transport & logistics sector, where we've looked at a layer of security around the data and a way that data is held and transferred in the supply chain. That might be something driven by things like chain of custody.

As you move through the supply chain, each point in the supply chain secure a transaction and it occurs within Blockchain. We're already working on that in the mining sector for moving minerals around. There's also a soft digital hardware layer for security.

What we're seeing is that you may have concerns over cellular networks as well. And so we're looking at an architecture where you could have an encrypted connection between our device and device at the user’s end. It can go over either satellite or cellular network, but it would still be secure.

What we're finding is that there's a level of security at the earth's station and the level of security in space. If you compare it to cellular, the cellular maps are on the ground. They can be accessed and people can interrogate links and spoof all kinds of different things, but our base stations are in space. It's much harder to do anything with security.

KV: What is the next big thing according to you in the IoT space?

We're doing some work with a company called NXP that allows machine learning and IOT. We're also working with the company called MConnected on their Mcore platform, which basically has a thing called application to enable the platform. But it allows lots of devices, highly scalable, and I think that area where IOT really starts to kick-in is when you're talking about 1000 devices or 5000 devices.

Life in 2050: A Glimpse at Transportation in the Future