Aircraft may soon be thought controlled Professor Florian Holzapfel along with Tim Fricke, an aerospace engineer and researchers at the Technische Universität München are working on Brainflight, thanks to funding from the EU. The project is aimed at allowing pilots in the future to fly aircraft solely using their thoughts. 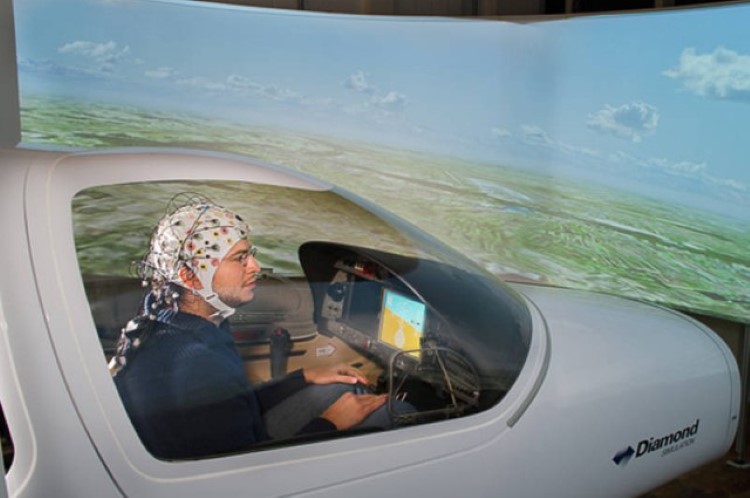 The team behind the project have described it as being “A long-term vision of the project is to make flying accessible to more people,” says Fricke in a news-release. “With brain control, flying, in itself, could become easier. This would reduce the work load of pilots and thereby increase safety. In addition, pilots would have more freedom of movement to manage other manual tasks in the cockpit.”

The whole thing does sound as though it is something straight out of a sci-fi movie, however the team did demonstrate that it does actually work. A cap is fitted with electroencephalography electrodes and the pilot wears this cap. This can then measure the electrical impulses on the scalp and in turn the signals get fed back into a computer. This was developed by scientists from the Berlin Institute of Technology. It translates the impulses into commands, which Fricke says is pure signal processing.

Tests were undertaken at the Institute for Flight System Dynamics in a flight simulator, with seven subjects taking part, each having varying levels of experience when it comes to flying. One of the test subjects had no experience whatsoever in the cockpit of an aircraft.

The test subjects used nothing other than their brains and were able to guide simulated aircraft with precision that, if they had been taking their flying license test, would have been enough for them to partially fulfil the requirements. Fricke said “One of the subjects was able to follow eight out of ten target headings with a deviation of only ten degrees.” What sounds even more astonishing is the fact that during the tests some of the people were able to guide the simulated aircraft and land it with success even in poor visibility.

At the moment the system isn’t ready to be tested using real aircraft as the team admit that they do have some hurdles which they have to overcome first. One of the biggest of these issues is that in real aircraft the pilot would actually feel some resistance when it came to steering the aircraft. Along with this, when large loads are factored in on the aircraft, the pilot would have to respond and exert some physical force. There is no feedback method in this new control method, which means that the team will have to find a way to overcome this factor and develop a mechanism for feedback.