A decommissioned Boeing 767 has just set sail on a barge across the Irish sea where it will be incorporated into a new resort owned by Irish entrepreneur David McGowan. The plane stretched a total of 159 feet, it was loaded onto a barge on May 7th from Ireland's Shannon airport. It takes a special kind of resort to use a Boeing 767 as a welcome structure, and the theme around this new "glamping" resort will be "glamor camping." The creator claims that guests will be able to stay in various forms of transportation, like taxis, jets, and busses according to UPI. The video below will give you an interesting look into the unique journey that this 767 took.

Airport officials say they never expected to see a Boeing 767 set sail on a barge, but they were happy to provide the resort with the plane. A line was placed around the barge which allowed crews to pull it slowly by tug boat, or in case it was necessary, pull it by a truck on land. The property manager for Shannon Airport, Deirdre Whitney, had the following to say about the event to Sky News:

"David McGowan's enthusiasm was infectious and we were delighted to be on hand to support him every step of the way with this unique project. We pulled out all the stops to assist, with safety and minimizing disruption to airport customers our key priority. I certainly never thought I would see the day when an aircraft would be put on a barge and set sail out the estuary. It will have a new lease of life which will boost not only the local economy in Enniscrone, but right along the Wild Atlantic Way. We wish David and his crew a bon voyage and every success with this venture." 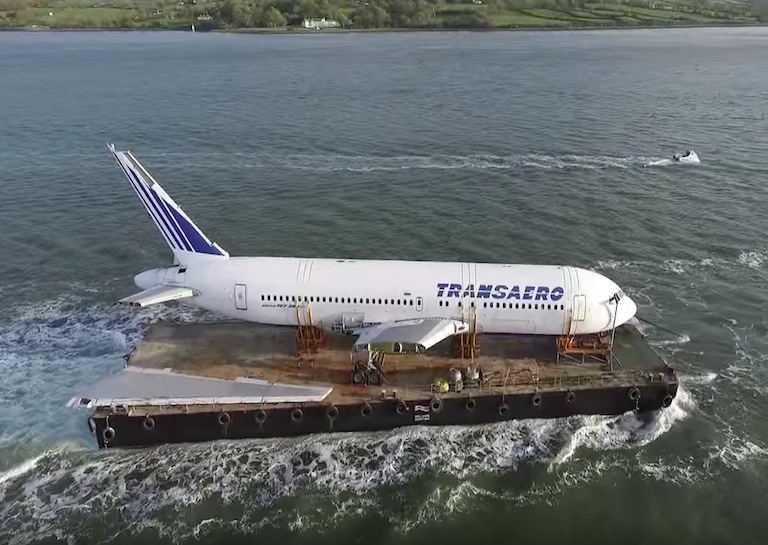 While using a decommissioned plane as a building may seem a little too weird for you, it is by far a better fate than if it were to sit in a plane graveyard rusting way. Would you ever consider living inside a Boeing 767?