Camp Century: US Army's Mysterious Cold War Base Buried Under the Ice Ever heard of "Camp Century"? Believe it or not during the Cold War America began the construction of a nuclear-powered research center under the ice of Greenland! The base was occupied between 1959 and 1966 under the apparent mission of Army Polar Research and Development. Although this was the official reason for its construction, the site may have had darker purposes...

So without further ado lets uncover the US's secret Greenland ice base of the 1960's!

The site for the base was chosen in 1959 about 1290 kilometers from the North Pole. The area was around 1880 meters above sea level on a flat plateau with temperatures of -20 degrees centigrade with record temperatures of -70 degrees and wind speeds of 125 mph! It must have been a nightmare posting! The area has an annual snowfall of about 1.2 meters.

The base's construction was under the command of one Colonel John H Kerkering. Construction began in June of 1959 and the entire facility was completed in October 1960. The entire project cost around $8 million dollars which did include the portable nuclear power plant. A steal we think you'll agree.

Most of the base was built using the most abundant material to hand, snow! The entire facility used a "cut and cover" trenching technique for construction. Long ice trenches were dug using Swiss made "Peter Plows" which are effectively giant rotary snow milling machines! With two operatives per machine, they could move up to 1200 cubic yards of snow in an hour! The biggest trench, which measures around 330 meters long and 8 meters wide by 8.5 meters high was dubbed the "Main Street".

After excavation, the twenty-one trenches were covered in arched corrugated steel roofs which were subsequently covered in snow. Within the trenches/tunnels, prefabricated wooden buildings and living questers were erected. Each of these structures was electrically heated and containing common areas and private quarters for staff. To prevent the snow structures from melting several meters of airspace surrounded each structure. The entire facility's heat build-up was further mitigated with "air wells" that were dug into the trench floors to introduce cooler air. Even with all these precautions the walls and roof required constant trimming to fight snow deformation.

The facility was a veritable home away from home with living quarters, kitchens and mess halls, toilets and showers, labs, post exchanges and even a barber shop to name but a few of the facilities on site. 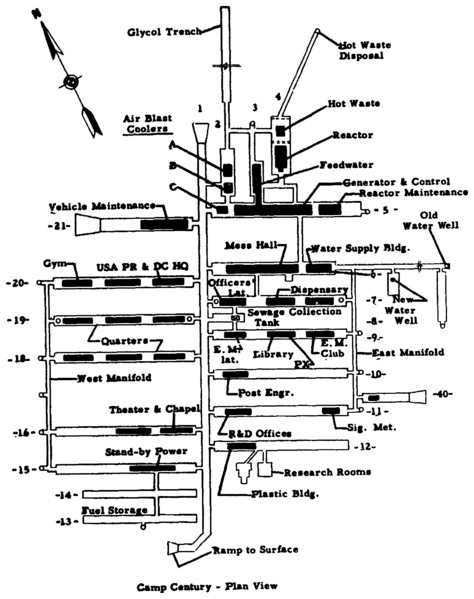 Century Camp was staffed all year round and had a population, at peak, of around 200 during the summer months. The camp did have its own mascot, however. A Siberian Husky called "Mukluk". The base was supplied by air from Thule Air Base and mere hundred and fifty miles west of it.

Freshwater wasn't really an issue on the site, however. Being surrounded by snow and all that. The base used a "Rodriguez Well" to pump stem deep into an ice well to provide a constant supply of fresh water!

Studies at "Camp Century" primarily revolved around deep ice core drilling. The bottom of the Greenland ice sheet was reached in 1961 for instance. Further deep ice coring attempts were made but they sadly failed due to shifting ice breaking the drills. These cores were able to extract 100,000 years of climatic history that wouldn't really be studied until decades later! The data from the cores have most recently been studied for Palaeoclimatic studies as well investigating past meteorite and comet impacts!

Other studies on the base focussed on meteorological studies as well as physical properties of the ice sheet itself. It was also used, as you might guess, to study the effects of living and fighting in arctic conditions.

A darker reason for the base

At the time Camp Century was built, long-range bombers and ICBMs had become a reality. It was probably inevitable that arctic regions would be explored for strategic missile sites. Camp Century has been rumored to have been a pilot project for a later network of proposed missile sites hidden under the ice. The project was codenamed "Project Iceworm" and the US military had ambitions to built a massive network of tunnels armed with "Iceman" ICBM missiles under the Greenland icecap.

The project was later canceled and apparently, no missiles were ever deployed at the base. Camp Century had an earmarked lifespan of about ten years if properly maintained. During its occupation, the base needed constant trimming of snow, about 120 tons a month and it was prey to the constant motion of the ice sheet. The base was finally abandoned in 1966. The US army did revisit the base in 1969 to find that the base was, more or less, completely ruined.  Most of the structures inside the trenches were completed ruined and crushed. It is believed that today the entire structure has now been totally reclaimed by the ice sheet. Imagine all that 1960's military memorabilia and building wreckage permanently frozen for future generations to find! 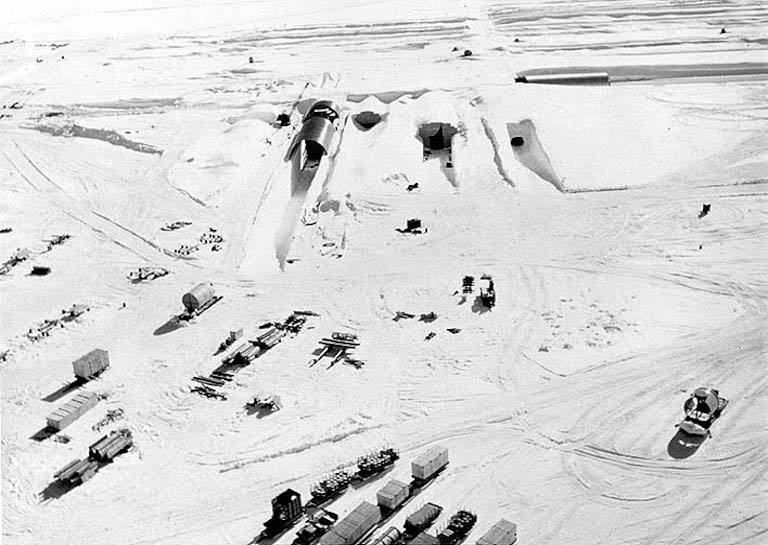 There have been some recent discussions about "Camp Century". These have revolved around environmental concerns about the site. Apart from large amounts of construction materials, there is said to be diesel fuel and a lot of polychlorinated biphenyls left behind at the camp. There is also a fair amount of gray water and sewage and of course low-level radioactive waste there too.

Although most of this is now locked in the ice sheet, there are concerns that warming and melting of the ice sheet could lead to potential environmental contamination in the future. Studies predict this could occur as early as 2100 and the entire area is under further study by NASA.

So there you go, Camp Century! Cool eh? (no pun intended). What do you think about it? Was it built for purely scientific studies or was it intended to be an ICBM missile site from the word go? We'll never truly know. We welcome your comments below.