We've all seen artificial gravity in many sci-fi films or read and dreamed about it in novels. But is it actually possible? In space, prolonged exposure to low gravity causes real health problems for astronauts. This can range from muscle atrophy, reduced bone density, impaired immune responses, impaired mental health and insomnia to name but a few. Clearly, if we are to "take our destiny" and explore or even inhabit the stars, we will need to overcome the annoying need for gravity.

Let's have a look at some possible solutions.

The problem at hand

Astronauts regularly experience intermittent linear accelerations during launch and breach of Earth's gravity and atmosphere. These forces, however, are not technically artificial gravity but side effects of transit into the void. In this context, we mean sustained force created intentionally by technology intended to provide this effect. Sadly no practical solution has been developed and deployed yet. This is mainly due to the size required and cost of delivering components into space. We could, of course, build the ship in orbit using material extracted from the moon or asteroids. Perhaps we could even us space elevators.

If we could develop artificial gravity systems we could, in theory, extend human occupation of low gravity environments indefinitely. This would be, of course, subject to overcoming other issues such as food, water and social interaction. Artificial gravity would eliminate, or at least mitigate, the adverse health effects of low to zero gravity on the human body.

Films and TV series' the likes of 2001: A Space Odyssey, Elysium or most importantly Superted's space station, show us generally accepted solutions. These usually involve rotation to invoke centrifugal forces/effects to simulate gravity. Other solutions may involve magnetism or "fields" to provide the desired effects. Over the next few sections, we'll briefly discuss these different solutions. 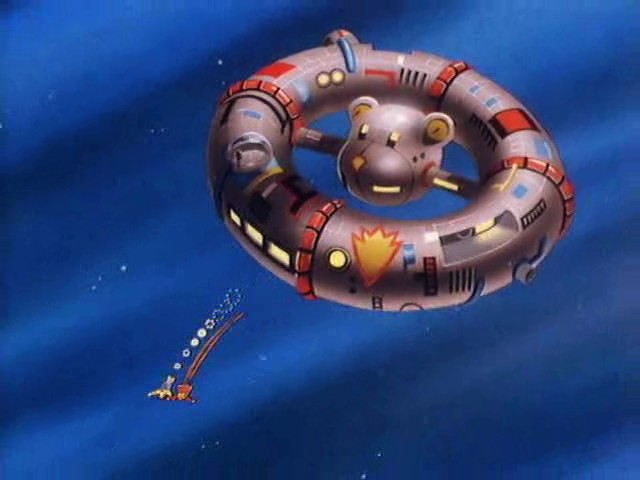 This tends to be the go-to solution in many depictions of our future in space. In effect, this solution proposes utilizing a spinning cylinder, torus or sphere. These would simulate the effects of gravity produced by massive objects like planets. The principle is to generate a force, often termed centrifugal force or effect to "pin" the astronauts to the outside edge of the spinning section of the station. By varying the radius and rotating speed you can directly affect the simulated "gravity" force.

Interestingly centrifugal force is often termed a pseudo force as it's not actually a force. It's actually more of an inertial movement away from the axis of rotation. It is, in effect, the result of the centripetal force of an object moving in a circular path.

Semantics aside, you often feel this effect when using amusement park rides such as the Gravitron. The spin of the ride pins you to the side and produces a, frankly, nauseating experience, perhaps it's just me. You can also create this by spinning a bucket full of water over your head with enough velocity.

Interestingly, NASA conducted various experiments during the 1960's which showed the application is viable, in theory.

There are significant challenges for creating rotating spacecraft, as you can imagine. They are, however, relatively modest compared to other proposed solutions. With rotating craft, the radius of rotation grows with the square of the orbital period. A doubling of the period requires four times increase in the rotation.

If you wanted to simulate Earth's gravity, for example, you would need a radius of 56 meters if the orbital period was 15 seconds. A period of 30 seconds would need 224-meter radius and so on. As delivery of materials to space is very expensive, at present, designs would need to reduce mass as much as possible. Ship designs could also assist to keep the material needed to a minimum.

Similar in principle to rotational solutions, linear acceleration could also simulate gravity for the crew. If we could produce enough constant acceleration in a straight line, the crew could be "pinned" to the ship in the opposite direction of travel. This "pull" would cause any loose objects, like astronauts to "fall" towards the hull. In effect, it would produce a manifestation of gravity in compliance with Newton's laws.

This solution would be highly desirable as to provide artificial gravity similar to Earth's. Also, short flight times could be achieved around the solar system. If a ship could produce 1g average linear "gravity" during acceleration and deceleration, the ship could reach Mars in a few days.

Diamagnetism might be another potential solution for providing artificial gravity. Researchers have, amazingly, been able to levitate mice by using high powered magnetic fields. Their experiments were able to simulate around 1g of Earth's gravity, pretty cool. These kinds of magnets need very expensive cryogenics to keep them superconductive, however, not to mention the power needed.

These kinds of magnets need very expensive cryogenics to keep them superconductive, however, not to mention the power needed.

The long-term effects of this technology on living organisms has not been studied and is unclear. This approach would also require avoiding ferromagnetic or paramagnetic materials near the fields.

Artificial gravity is generally a "given" in science fiction. It usually appears as any of the above or some etheric anti-gravity or "paragravity" form of technology. At present, there are no confirmed methods of producing this other than those involving the use of mass or acceleration. Eugene Podkletnov, a Russian Engineer, has claimed since the 90's that he has successfully created a device to create a gravitomagnetic field. This hasn't been verified by third parties, however. Another research groupp, funded by ESA, created a similar device in 2006. Their results only managed to create around 0.0001g. This has also not been replicated, however.

String theory does predict that gravity and electromagnetism might be unified in hidden dimensions. This could be a way to "generate" gravity in the future. There is also the potential existence of "gravitons". Manipulation of these, as yet undiscovered particles, could also be a technology of the future, if true.

This technology as most definitely in its infancy but provides interesting prospects for humankind's future in the stars. If we can solve this puzzle, our future in the galaxy is partway set. We just need to solve other issues like survival and propulsion, of course, you know minor inconveniences. Perhaps the construction of these ships could use some form of giant orbiting 3-D printers? The mind boggles.