So you've got yourself a new drone, you test it out to realise your pilot skills are not as good as you thought they'd be and you keep knocking into things. The last thing you really want with your drone is a mid-air collision but for the Gimball it is it's main selling point. Described as the first "collision proof drone" it just won $1 million at the Drones for Good international competition held in Dubai. 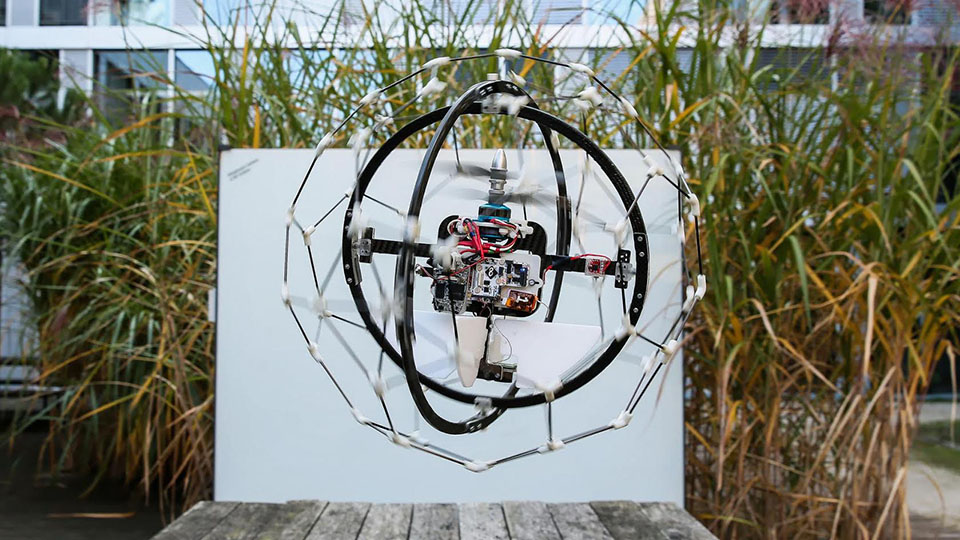 It was created by Swiss company Flyability and it utilises a rotating spherical outer cage that means it can be used safely in close proximity with people. Designed to enter hostile environments such as burning buildings and radioactive sites, Gimball maps its surroundings and can roll across ceilings and floors, navigate restricted areas, and transmit RGB and infrared images back to disaster relief services.

Surrounding the multi-axis gimbal system with its built-in camera is a carbon fiber outer cage that absorbs the shock of any collisions and the gimbal system means that the cage can roll about independently of the camera.

Other drones would have difficulty getting through tight zones and a collision could see them left for dead in the field. The Gimball on the other hand just bounces back off what it collides with (although we imagine a sharp object like a branch might be able to sneak it's way in and touch the rotors.

Apparently the inspiration for the collision proof drone came from watching a fly bouncing against a window trying to escape. Hardly the most inspiring of scenes but in this case it worked out pretty well.

"We were wondering why insects were so capable of going inside any building -- yet had limited senses such as eyesight," explained co-creator Adrien Briod. "One capability that was completely overlooked was their ability to collide into surfaces. For insects this isn't a big deal -- but it is for robots."

Gimball beat 39 other competitors in the competition that was created to try and change the bad image of drones, notorious for unmanned bombings and dispersing protests.

With $1 million in their pockets the team will now head back to Switzerland will now develop the product specifically for first responders, adding features like infrared imaging for dark or smoky environments and better indoor localization.