Google's computer program called AlphaGo was able to defeat the Chinese grandmaster, Ke Jie, in a game of Go with a two streak of wins out of the 3-set match. This is a significant milestone for its developer DeepMind and a big challenge for its human opponents to beat in the future. 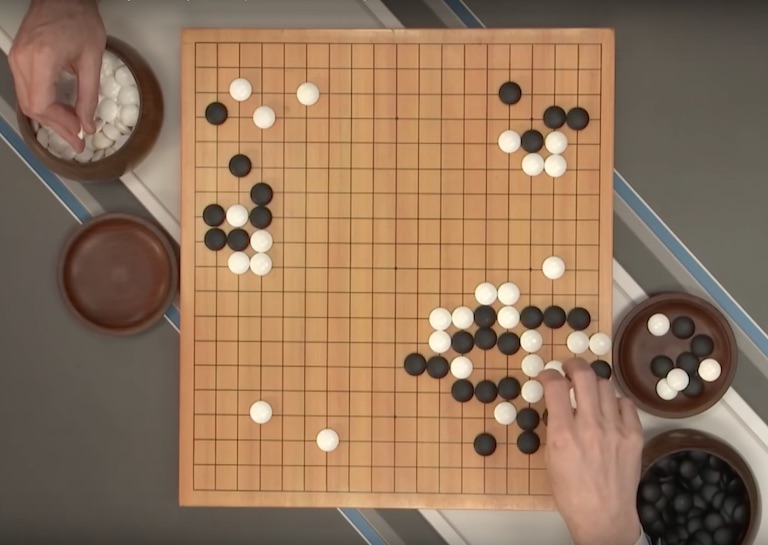 This oriental abstract strategy board game, invented by the Chinese 2,500 years ago, works by dominating the board with either the white or black stones. The board has a 19-by-19 grid where two players take turns in arranging the stones, with accordance to the game's rules, in order to establish the most territory. Seems easy enough but if you consider the amount of black and white stones, 181 black and 180 white to start with and 361 in end total, that correspond to the 19-by-19 grid, this game is no joke. If you do the maths on those numerical variables, you will find that Go has an astonishing 10 to the power of 170 board moves. This is a googol time more difficult than Chess with only 10 to the power of 60 possible moves.

Conventional AI methods simply won't do because of the immense number of possible moves that can be done, which makes it extremely difficult for the program to evaluate the effectiveness of each possible board position. AlphaGo is then artificially trained in a combination of advanced tree search with deep neural networks. The neural networks function by taking a description of the Go board as an input information and process it via a number of various network layers with millions of neuron-like connections. Part of this is a 'value network' that evaluate the board positions and a 'policy network' chooses the consecutive move to play.

AlphaGo was then trained against a large volume of quality amateur games to help develop its own comprehension of what human play looks like. Furthermore, the AI system was trained against itself through reinforcement learning process.

From its previous win last year against South Korean Go legend Lee Se-dol, AlphaGo has once again proven its highly advanced system by recently defeating the 19-year-old grandmaster Ke Jie. Winning with a 2-0 lead in a best-of-three match, Ke Jie gave up on AlphaGo after the first set lasted for 4 hours and 15 minutes.

The teenager champion was surprised with AlphaGo's game style and was reverent of the AI system's Go abilities. He was initially shocked during their first game as AlphaGo's skills were unprecedented. "There were some unexpected moves and I was deeply impressed. I was quite shocked as there was a move that would never happen in a human-to-human Go match", said Jie.

From second and latest defeat today, Jie expressed his bittersweet sentiments about the way he played. "Today’s game was different from the first," Jie said. "AlphaGo made some moves which were opposite from my vision of how to maximize the possibility of winning. I also thought I was very close to winning the game in the middle but maybe that’s not what AlphaGo was thinking. I’m a little bit sad, it’s a bit of a regret because I think I played pretty well".

DeepMind's CEO, Demis Hassabis, expressed his gratitude to Jie for being such an incredible opponent for AlphaGo. "It was such a close game, an exciting game and showed how much work Ke Jie put into preparing for the match. It was interesting for us to see him using moves from AlphaGo's previous games, and we were intrigued to see how AlphaGo deals with its own strategies used - huge respect to Ke Jie for pushing AlphaGo to its limits".

Hassabis added that DeepMind's ultimate goal is for AlphaGo to be deployed in the fields of science and medicine.

DeepMind's paper on the AI technology of AlphaGo was published in Nature.