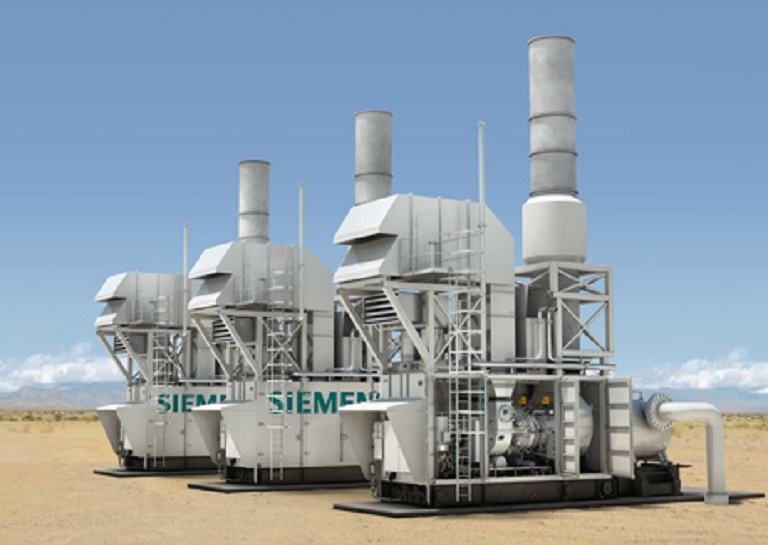 With great power comes a lot of sound, sound that could kill you if you stepped to close. Hence why massive industrial turbines need similarly incredibly massive mufflers to contain the noise and protect the workers.

Turbine engines generate a lot of noise, over 150 dB from 25 meters away. That is enough to rupture an eardrum and warrant a hospital trip. Airports combat this by building runways far from any outside people or workers. However, in an industrial setting optimal placement for noise reduction is not an option. The only way to minimize the noise is to build a massive muffler to contain it.

The industrial turbines function in much of the similar ways that conventional jet engines work. Air is forced in through a series of compressors where the air is diverted into two sections. The majority continues on and cools the engine. A small portion, however, is destined for the combustion chamber where chemical energy is converted into mechanical energy, rapidly expanding the air and forcing its way out. The air is recombined to cool the air before it meets the first turbine set. The turbine converts the airflow into rotational energy which is connected via the turbine shaft to the generator. The exhaust carries the bulk of the noise, which is directed out into the massive muffler.

Industrial turbines are used for power generation for large complexes as well as on massive ships. The mufflers must be compact but must reduce the noise significantly while simultaneous removing harmful elements out of the air. Since turbines pump out a lot of air, the muffler must deal with it as fast as it comes out. To do so, the silencers deal with up to 60,000 acfm (actual cubic feet per minute standard).

The exhaust temperatures are also incredibly hot. With no external air to cool the engines such as in jet liners, the only air that is used to cool is the air that is redirected around the combusters. As a result, all the heat is pumped out the end. Because of the intense heat, the silencers must accommodate for temperatures up to 1,200° F (650° C).

The heat causes great stress to accumulate on the walls of the silencer. To combat fractures and cracks 12 ga to 3/8" casings with 12 ga internals are used and are specifically designed to accommodate for thermal expansion.

The extreme heat also requires the turbines to be constructed out of heat resistant materials including carbon, stainless and corten steels. That material, however, is for the most part heavy, causing the massive devices to weigh up to 25,000 lbs (about 10,000 kg). However, that material is used with great purpose in order to retain the pressures approaching 120" wg

All the weight is strategically used to redirect and absorb the sound within the silencer. The muffler, however, is unlike the mufflers generally used within car exhaust systems. The high wind velocities would ultimately destroy the device as soon as it was used. Gas turbine mufflers function similar to gun silencers. The bulk of the gas is allowed to flow through a central portion as some is dissipated through small ports along the tube. Once being slowed down to manageable levels, the gas enters a reactive discharge tube where toxins are removed from the air. Then, moving on to the final stage, the air enters an 'acoustic bullet' which is heavily insulated to further diffuse any sound. By the time the exhaust leaves the chamber, it is many thousands of times quieter than it was after combustion. 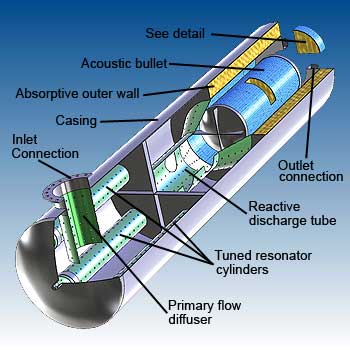 Through the incredible technologies behind noise reduction, gas turbines have moved far beyond the reaches of the sky. The turbines generate electricity for businesses, boats, and entire populations. The technologies behind noise reduction enable workers to perform maintenance and carry out normal operations directly beside turbines in close proximity that would otherwise deafen them as they blast away at full speed.

More Stories
sciencePlants can now regenerate faster when injured. With a chemical tweak?
Loukia Papadopoulos| 2/12/2022
culture7 functional fandeliers that will transport you to cloud nine
Atharva Gosavi| 4/27/2022
scienceWant to protect your brain from aging? Learn another language
Paul Ratner| 8/15/2022