Landmine detecting soles can save hundreds of lives in Colombia A Bogota based company has come up with an innovative shoe sole that detects and transmits the locations of nearby landmines, thus saving the lives of those heading into the jungles of Colombia. 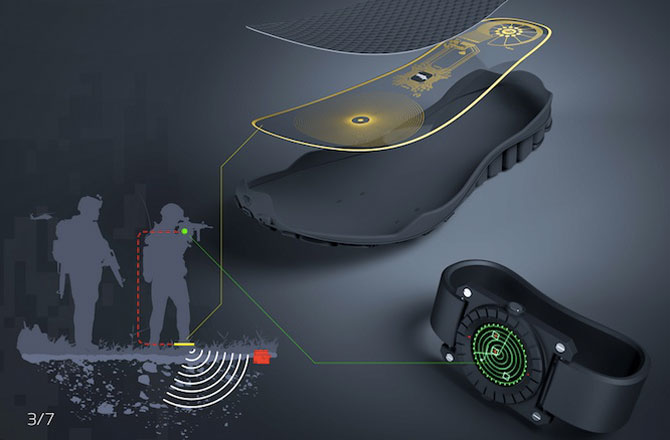 [Image Source: Save One Life]

The sole, which has been developed by Bogota-based Lemur, uses a planar coil placed on a thin conductive material set in the sole to detect nearby metallic objects (read landmines) using electromagnetic waves. This information is then transmitted to a wristband interface using a radio transmitter and a microprocessor, which, as you would have guessed, are set in the sole as well.

The landmine detecting sole has been named SaveOneLife because, in Lemur's creative director Ivan Perez's words, “The device was created with the goal of saving a life, hence the name, first by the families of the victims and second for the cost effects of military forces by the loss of his men in combat,” This makes sense when one considers that over 10,000 people have been injured since 1990 in the jungles of Colombia thanks to the landmines strewn there as legacies of a protracted conflict between the FARC, the Colombian military and illegal drug mafias. Over 2,000 of these people died, so SaveOneLife – if it succeeds – can really prove to be a lifesaver for those soldiers and ordinary folk who venture into such dangerous terrain.

Considering the product's potential, it is not surprising that SaveOneLife has been nominated for World Design Impact Prize.

More Stories
scienceSpaceX Polaris Dawn is planning its first crewed launch in December
Loukia Papadopoulos| 8/7/2022
scienceHumans could breathe out of their buttholes like pigs, and trials will begin this year
Deena Theresa| 8/3/2022
innovationSociety could fight future heatwaves with a radical shift in homebuilding
The Conversation| 8/7/2022