First, they are making your hamburgers, now they are mixing your cocktails. America's first robot bar is opening in Las Vegas this month. The Tipsy Robot bar will open in Planet Hollywood with drinks being poured by its fully autonomous robot staff.

Customers order a drink through their smartphones or by using a tablet at the bar. You’ll need to register with your email address and get a QR code with your drink order in it. 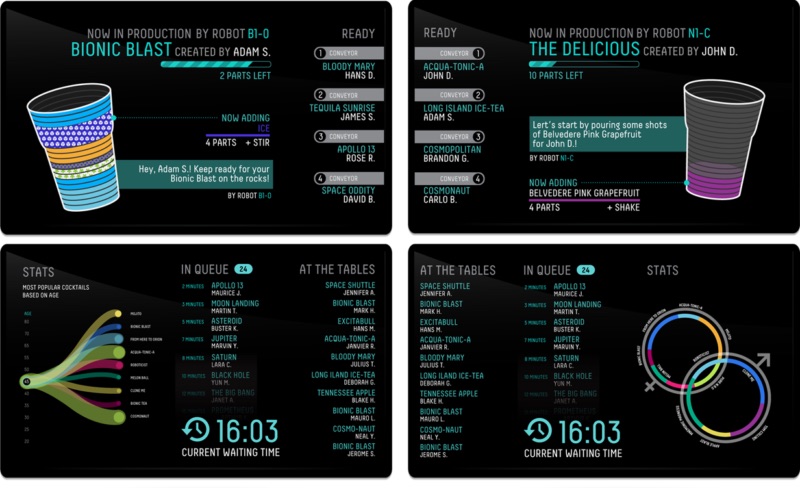 The robot will read the code and reach its articulated arm to the ceiling to pour out your favorite tipple from one of 150 bottles of liquor suspended from the ceiling. Once your drink has been poured, the robot places it on a short conveyor belt that delivers it to you. The robots then rinse and wash themselves and their glasses.

The owner of the Tipsy Robot, Rino Armeni says, “My partners and I decided to do something to create a new trend so we can be ahead of time. So, this is a gift from us to the city of Las Vegas.”

While the bar is about the robots, regular staff are also present to pour beer, champagne, and mimosas. As with lots of hype from Las Vegas the robot experience comes with a price tag, a single shot drink will set you back $14.  $14.

The robot bar is located at the Miracle Mile Shops and between drinks, the robots will even dance for you to a soundtrack that includes a good mix of electronic dance music and top 40 hits. While they can't offer sage life advice the robo-mixologists are hardworking, using breaks to slice fruit and clean their work areas.

Many will see this as just another step towards the day when robots replace humans in all their jobs. Elon Musk, founder of PayPal and Tesla recently commented on the rise of automatons, saying, "There is a pretty good chance we end up with a universal basic income, or something like that, due to automation. Yeah, I am not sure what else one would do. I think that is what would happen."

Universal Basic Income is when a government gives a regular stipend to each citizen regardless of their income from other means. Hawai recently passed a bill that paved the way for a UBI to be introduced to the island state.

Automation is already happening in a lot of industries  Amazon adopted to AI quickly by employing an army of bright orange wheeled robots that work in some of its warehouses moving stock. Amazon reportedly has a fleet of 45,000 robots across 20 fulfillment centers. The buff little robots stand just 40cm high, weigh 145 kilograms and can carry a load twice their body weight. Amazon adapted to AI technology after purchasing the robotics company Kiva in 2012 and developing the technology specific to their needs. The long term investment has really paid off with Amazon increasing its efficiency through the robots as well as decreasing injury and fatigue in workers.