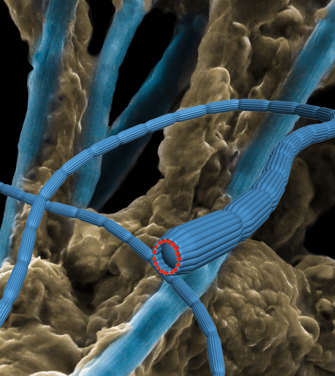 Desulfobulbus bacterial cells are so tiny that they are invisible to the naked eye but, under the right circumstances, form a multicellular filament that can transmit electrons across a distance as large as 1 centimeter as part of the filament’s respiration and ingestion processes. The discovery by scientists at Aarhus University in Denmark and USC was published in Nature on Oct. 24.

“To move electrons over these enormous distances in an entirely biological system would have been thought impossible,” said Moh El-Naggar, assistant professor of physics at the USC Dornsife College of Letters, Arts and Sciences, and co-author of the paper.

Aarhus scientists had discovered a seemingly inexplicable electric current on the sea floor years ago. The new experiments revealed that these currents are mediated by a hitherto unknown type of long, multicellular bacteria that act as living power cables.

“Until we found the cables, we imagined something cooperative where electrons were transported through external networks between different bacteria,” said Lars Peter Nielsen of the Aarhus Department of Bioscience and a corresponding author of the paper. “It was indeed a surprise to realize that it was all going on inside a single organism.”

The solution? They form long chains that transport individual electrons from the bottom to the top, completing the chemical reaction and generating life-sustaining energy.

“You have feeder cells on one end and breather cells on the other, allowing the whole living cable to survive,” El-Naggar said.