This Low-Energy Ultrasonic Dryer Will Save You Money And Time We all have the fantasy of spending less time and energy bills on laundry. And this dryer is about to fulfill that.

The ultrasonic dryer will halve your laundry time and save three to five times amount of energy used. A huge deal considering the National Resources Defense Council reports that Americans spend up to $9 billion annually on energy bills from using dryers.

Developed in response to a Department of Energy innovation challenge, the ultrasonic dryer uses high-frequency vibrations to suck the moisture out of wet fabrics at a faster pace, according to the research paper submitted by Oak Ridge National Laboratory.

The ultrasonic dryer is modeled after existing ultrasonic humidifiers that use high-speed vibrations to turn water from steam.

This is unlike the traditional dryer which has been around for decades, 1938 to be exact, that uses heat to draw out steam at a far inefficient scale.

The lack of heat also means the ultrasonic machine will cause less wear, shrink, and fading. This also means that less lint will be produced thereby preventing fire incidents that can occur if the lint trap is not cleaned properly.

Currently, the team led by Head researcher, Ayyoub Moren, only has a small battery-powered working prototype that is capable of drying a small piece of wet cloth. 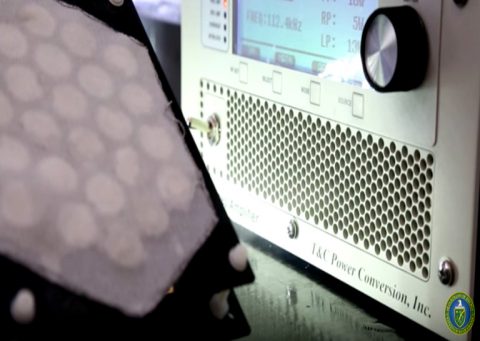 There is, however, good news. In a partnership with General Electric, commercial units capable of drying a whole basket of laundry should be available for home usage in a few years’ time. This would be at a projected price either less or equal to the cost of premium traditional heat-it-up and tumble dryers which are around $500 - $1000.

The availability of a working prototype is billed for August 2016. This will mark the beginning of a big upgrade to the present home dryer. One even less efficient than its European counterparts, according to Forbes.

With over 85% of American homes having a traditional dryer, Momen posits that the environmental impact from the introduction of the ultrasonic dryer will be huge. The change we hope for is starting with this dryer, he says.

SEE ALSO: Amazing Machine Folds Your Clean Clothes for You!