A new power plant in Hawaii is using a renewable energy process that previously proved to be unpopular because of its low levels of efficiency. Ocean Thermal Energy Conversion (OTEC) utilizes the temperature difference between deep, cooler, water and shallower, warmer, water to run a heat engine to generate electricity. It is a base load electricity generation system providing electricity all day, all year round. Unfortunately, the process is not very efficient because the temperature differential is fairly small. This means that its economic feasibility is minimal.

The theory behind OTEC emerged around 1881 when a French physicist named Jacques Arsene d'Arsonval developed the concept. This was then taken on by his student, Georges Claude, who built the world’s first OTEC plant in Cuba in 1930. Unfortunately, this was destroyed in a storm soon after its construction. Various smaller plants appeared but OTEC was never really of any interest until the 70's and 80's, and even then for just a short period due to a fall in oil prices. 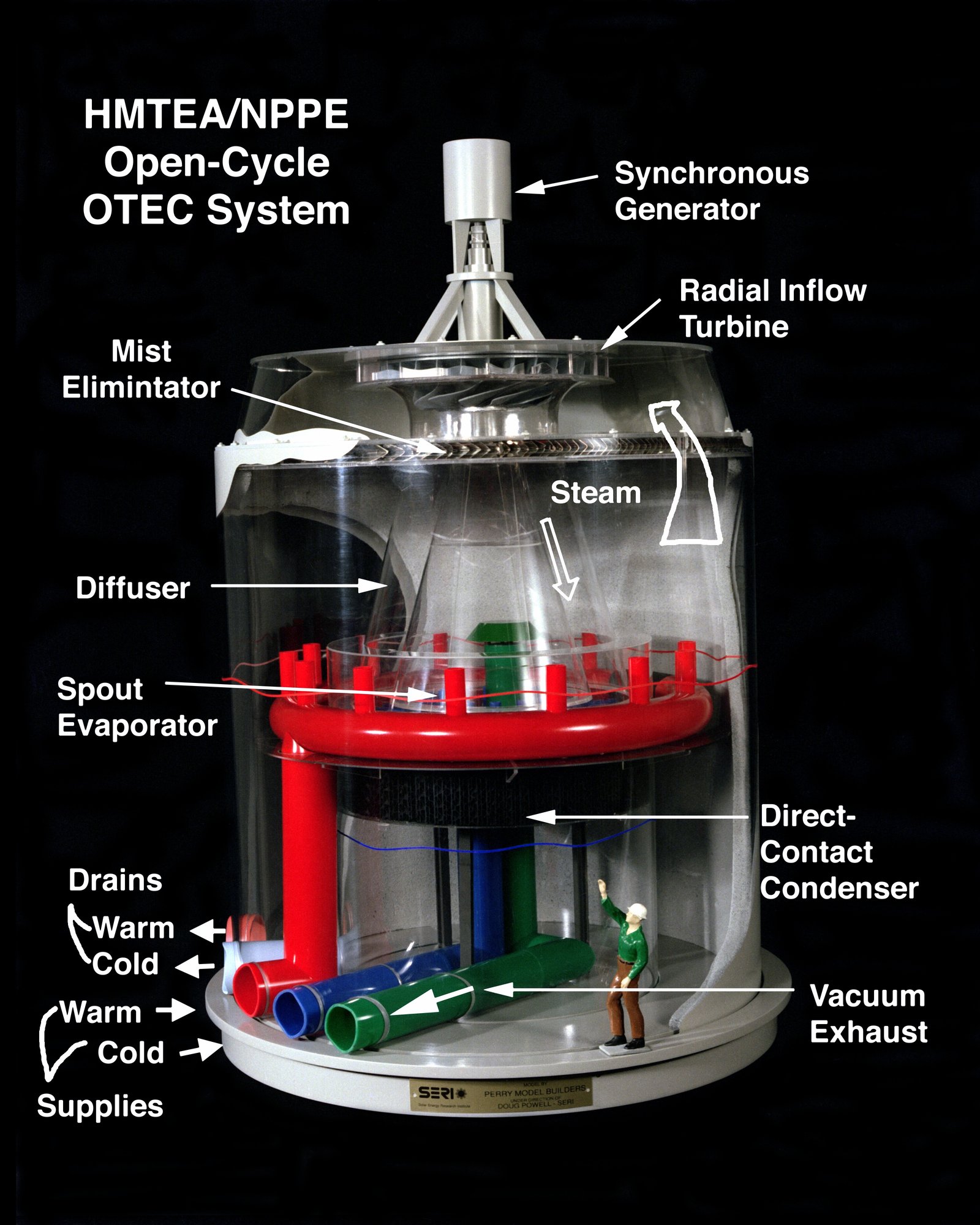 Despite this rather uninspiring history, OTEC could potentially contribute to base-load power supply. Pelc and Fujita (2002) have concluded that the process could generate up to 88,000 terrawatt hours per year of power without affecting the ocean’s thermal structure and in 2010 a technology similar to OTEC was used to develop a thermal engine that was able to power an unmanned submarine indefinitely.

The new power plant in Hawaii has been built by Maki Ocean Engineering, which is expecting it to generate enough power for up to 120 homes. The system uses ammonia, which has a low boiling point compared to other liquids and which is passed through pipes surrounded by warm water. This causes the ammonia to evaporate into a gas which in turn powers a turbine thereby generating energy. The process is reversed by using freezing cold water taken from water at a depth of 900 metres to turn the ammonia back into its liquid form, again powering the turbines.

The new plant is currently installed at the Natural Energy Laboratory of Hawaii Authority (NELHA) but the company wants to take it further out into the Pacific Ocean, thereby reducing the distance the water has to travel when being pumped into the system. Maki believes that 12 such plants could power all of Hawaii.

One of the big advantages is that this system is able to run without any peaks or troughs in supply, however the plant is still very much in its initial testing stages, although there are similar projects currently in operation in Japan and South Korea. The plant in Hawaii is only really meant for research, which is just as well because it actually only produces around 100 kilowatts of power, and most of that is used by the pumps. The plant’s primarily function is to test heat exchangers, which tend to be fairly expensive. Maki says that when a generator is added, the plant will be able to design an automatic control system, thereby improving both the plants performance and the cost predictions for commercial plant designs.

Luis Vega of the Hawaii National Marine Renewable Energy Centre believes that the first large scale plant to use OTEC could be the 16 MW New Energy for Martinique and Overseas (NEMO) project, due to be constructed off the coast of Martinique. This is a collaboration between two companies based in Paris, Akuo Energy and defence company DCNS and will be located about 5km off the Martinique coast. It will be able to supply around 11 MW of energy to the island with the remaining 5 MW powering the plant and pumps. Construction of the project is due to start next year with a view to commercial operation beginning in four years’ time. According to Emmanuel Brochard, of DCNS, it will be the first industrial-scale OTEC plant in operation.

“The success of the NEMO project is a source of pride for Martinique and all the French overseas regions” said Akuo Energy chief executive Eric Scotto, speaking to reNEWS. “This decision on a European level consolidates the development of our group in insular tropical regions, on the most appropriate marine renewable energy technology for these specific areas.”