An ongoing NIST (National Institute of Standards and Technology) project is closing in on one of the most urgently sought-after goals in modern science: The ability to observe the detailed dynamics of chemical reactions as they happen – on the spatial scale of molecules, atoms, and electrons, and on the time scale of picoseconds or even shorter.

The researchers have devised and demonstrated a highly unusual, compact, and relatively inexpensive x-ray source for an imaging system that may soon be employed to produce the kind of “molecular movies” that scientists and engineers need. “I believe that we are going to be able to measure interatomic distances to sub-angstrom accuracy,” says Joel Ullom of the Quantum Devices Group in PML’s Quantum Electronics and Photonics Division, Principal Investigator for the collaborative project and head of the team that created the x-ray source. “And we will be able to watch atomic-scale activity with picosecond resolution during chemical reactions.”

The "x-ray source is a novel table-top system that creates picosecond pulses of x-rays, a holy grail among scientists who are trying to elucidate the precise, real-time motion of electrons, atoms, and molecules,” says Marla Dowell, leader of PML’s Sources and Detectors Group. “Eventually, this table-top approach will be able to compete head-to-head with far more expensive and elaborate synchrotron techniques.”

The operating principle  begins with a pulsed infrared (IR) laser beam, which is split into two parts. The first part is used to photoexcite a material under study, starting a chemical reaction. The second part is routed into a vacuum chamber, above which is a water reservoir that has a tiny aperture leading to the chamber. Water is drawn into the chamber in a 0.2 mm wide jet and the laser beam is focused onto the streaming water jet target. 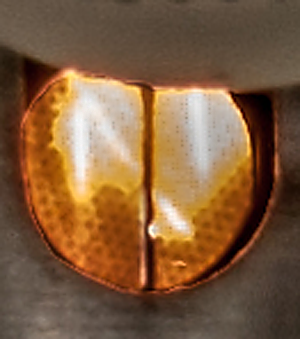 “This ignites a plasma on the target,” Ullom says, “and some of the electrons from the ionization are accelerated – due to the very large electric fields from the laser – back into the water target. There they undergo the same kind of abrupt deceleration that electrons do in a conventional x-ray tube. The IR beam has very little energy per photon. But what comes out of the interaction with the target are x-rays with energies 10,000 times higher. Then we collimate the x-ray beam so that it strikes the sample of interest.” The x-rays then pass through the sample and into a separate cryogenic chamber where superconducting x-ray detectors record the absorption spectrum.

In September, the team demonstrated that the x-ray source was stable over substantial time intervals. The next step is to begin doing science with it. “We’re very interested in photoactive materials, components for next-generation solar cells and catalysts,” Ullom says. “We’ll start with model systems and go from there.