Over in Compton, California, sheriff deputies found thieves were snatching necklaces from women who were taking a walk through the town, they then turned to a high-tech method to tackling crime - live satellite feeds. Ross McNutt, a retired Air Force veteran operates a surveillance company that could offer police a live Google Maps style stream to keep an eye on the streets.

Ohio based Persistent Surveillance Systems, the company set up by McNutt, was approached by Los Angeles County Sheriff Department who talked him into using the technology he uses for surveillance so that they could watch the streets of Compton from the air. This meant thieves could be tracked from the minute that they began snatching bags in the region. 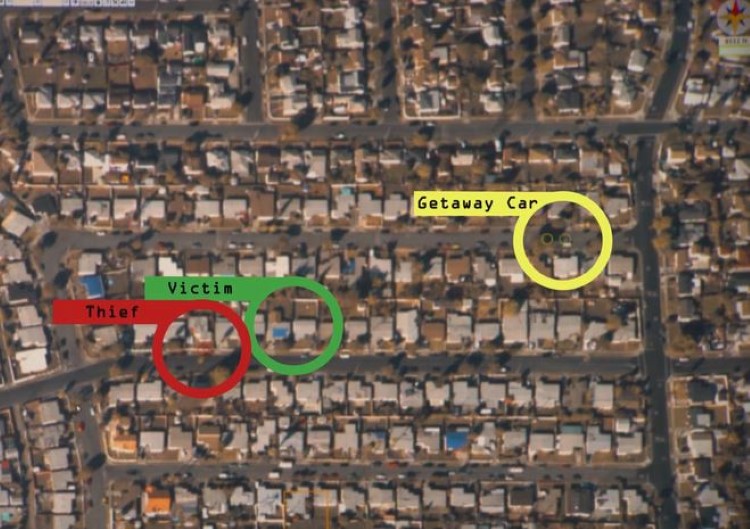 The system works by filming and recording the whole city in real time. Imagine Google Earth with a rewind button and past events can be played back, showing the people walking in the city and driving around in cars.

“We literally watched all of Compton during the time that we were flying, so we could zoom in anywhere within the city of Compton and follow cars and see people,” McNutt said, “Our goal was to basically jump to where reported crimes occurred and see what information we could generate that would help investigators solve crimes.”

McNutt has a doctorate in rapid product development and he worked on the wide-area surveillance that was used to find suspects involved in bombing in Afghanistan and Iraq. His idea was that if you attached many high powered surveillance cameras to the belly of an aircraft it could become a game changer when it came to law enforcement in the US.

At the moment the FBI are spreading out a data complex which has more than 147 million photos and fingerprints, a lot of these are also of people who are not criminals. They are merely collected from people who have submitted their fingerprints for checks, for example when looking for a job. Plans by the FBI are at the moment being finalised to ensure that over 130 million fingerprints will be digital and searchable.

Surveillance centres are being used by law enforcement analysts to watch video feeds and crimes that have been reported, minute by minute.

In San Diego police are already using facial recognition software to help them identify suspects. This means that often officers don’t need to ask to see identification from suspects. They make use of a tablet to capture the image of someone and get an answer to who they are in around eight seconds. This is just one of the 21st century ways of law enforcement using unique biological markers; these include the iris, palm prints, faces and abnormalities on the skin.

Along with being able to help law officials catch criminals even faster, the technology could help those who are innocent to be exonerated. However civil libertarians are worried that the new tech could be misused.

“Once the nation has a facial recognition database, and once facial recognition capabilities improve to the point that we can identify faces in a crowd, it will become possible for authorities to identify people as they move through society,” said Jennifer Lynch, a senior staff attorney at the Electronic Frontier Foundation.

McNutt pointed out that the cameras based on the ground provide high resolution images, but said that the tech wasn’t capable of zooming in to capture faces. Cameras placed on the ground are limited when it comes to range and if an entire city was to be covered, an infinite number would be needed. McNutt went on to say that his technology will have improved in just a few years so that it could cover double the area, possibly the whole of San Francisco.

When it came to the issue with the necklace snatching in the Compton region, unfortunately the suspects of the crime drove beyond the range of the camera without being identified. While the system of McNutt, according to Sgt Doug Iketani, supervisor of the project, wasn’t able to offer detailed close up shots that could be used in court, the tech did help by giving useful leads.

More Stories
innovationEngineers saved a baby's life by printing the missing part of her skull
Nergis Firtina| 8/15/2022
scienceA massive asteroid, discovered last month, is traveling toward Earth at 20 miles a second
Ameya Paleja| 8/4/2022
healthScientist explains how drugs with the same chemical properties can have drastically different effects
The Conversation| 8/13/2022