Next time you go for a burger, it might not be a high school student that takes your order, rather an AI might ask if you want cheese on your patty. Introducing the BurgerBot. Invented by Momentum Machines, the bot is ready to totally change the way we know burgers.

You don't need to worry about the line cook messing up your order any more. The BurgerBot is a totally automated burger creating machine! The machine can pump out 400 burgers an hour. But not just any 400 burgers, all the burgers can be made with fresh ground beef, salad, complete with a toasted bun. 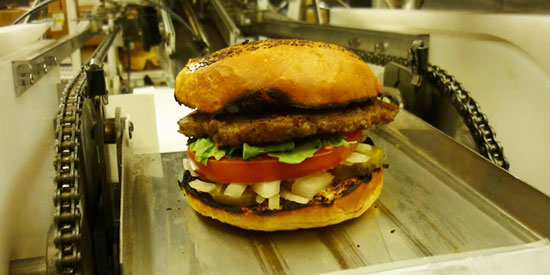 This isn’t just a concept, the team at Momentum, who just completed a winning funding round to the tune of $18 million are on the verge of opening the world's first robot hamburger restaurant.

Situated in the Bay Area, the restaurant will be the first of its kind anywhere. It has been a long time coming for the group of engineers and foodies over at Momentum who first released a concept of RoboBurger back in 2012. At that time Momentum Machines co-founder Alexandros Vardakostas told the press: "Our device isn't meant to make employees more efficient, it's meant to completely obviate them."

This is good news for takeaway managers and owners. Staffing restaurants cost massive overheads not to mention the stress of managing staff personalities, schedules, safety and training. Robots on the other hand work long hours and never get tired, and if they are working as designed don’t often make mistakes. This robot has a pretty expensive outlay of $30,000 but you can imagine it would pay itself off very quickly. Tech blog Xconomy reported the prototype they saw demoed could save a fast-food restaurant up to $90,000 a year in training, salaries, and overhead costs.

Job losses due to automation and AI

The debate has been raging lately about how we can really calculate the exact job losses due to automation and AI. On one hand, it is predicted that 1 in 7 jobs will be automated by 2025, on the other hand, it is predicted the job market would grow to accommodate all the new technical and maintenance positions that would be necessary to create and maintain the machines.

Momentum Machines has a strong opinion on it stating:

“The issue of machines and job displacement has been around for centuries and economists generally accept that technology like ours actually causes an increase in employment. The three factors that contribute to this are 1. the company that makes the robots must hire new employees, 2. the restaurant that uses our robots can expand their frontiers of production which requires hiring more people, and 3. the general public saves money on the reduced cost of our burgers. This saved money can then be spent on the rest of the economy.”

Whatever your opinion is, the idea of a perfect burger every time is pretty appealing. Automated food has so far proved to be popular, futuristic restaurant Eatsa, where you have no human contact to order and receive your quinoa based salad bowls is booming.

The exact opening date for the BurgerBot staffed hamburger restaurant is yet to be confirmed, but we are staying tuned with our orders ready!